2018 and 2021 champion Rafa Matos ran a dominant race at Sebring International Raceway, leading 25 of 27 laps in the opening event of the Trans Am Series presented by Pirelli’s 2022 TA2 race season. Matos faced a late-race challenge from teammate and 2020 champion Mike Skeen, but regained the lead in the closing laps to earn the race victory.

Matos started today’s feature race with the No. 88 3Dimensional Services Group Ford Mustang in the pole position after setting the pace with a record-breaking lap time of 2m05.717s in yesterday’s qualifying session. Taking the green flag next to his teammate Adam Andretti, Matos pulled ahead of the pack, with Misha Goikhberg’s No. 10 BC Race Cars Mustang and Connor Zilisch’s Silver Hare Racing Chevrolet Camaro falling in line behind him. Skeen, who started ninth due to a slipping clutch in qualifying, quickly wove his No. 89 3Dimensional Services Group machine through the front of the pack, taking over the third spot by lap five, and moving into second on lap 14.

A hard crash between Michele Abbate’s No. 30 GHOST Energy Mustang and the No. 43 6th Gear Garage Mustang of Roberto Sabato on lap 14 took the pair out of contention, with Abbate expressing her heartbreak.

“I had such a great car today,” said Abbate. “This is the last thing I wanted for my team; we were just in the wrong place at the wrong time. That was a really hard hit, one of the hardest I’ve ever had, but these cars are a testament to safety. This was heart wrenching for me; it was a really big deal for me to take the checkered flag, and unfortunately, we didn’t do that today.”

Two laps later, there was another dramatic crash, this time between Goikhberg and Gene Sigal’s No. 07 SigalSport Camaro. The incident brought out the red flag, stopping competitors on pit road for an extended cleanup. When the time came to refire engines, Skeen’s No. 89 did not initially fire and required a push start after the rest of the field pulled away. Successfully on his way, Skeen returned his Mustang to the second-place position.

At the wave of the green flag, Skeen pounced to take over the lead. He and his teammate Matos engaged in a hard battle before Matos was able to regain the lead two laps later. Matos held off his teammate and the rest of the field in the closing four laps to take the checkered flag. Thomas Merrill, running the car of his teammate Al Prieto who passed away during the off-season, brought the No. 2 BridgeHaul/HP Tuners Mustang home third.

“I could not feel better,” said an excited Matos. “It’s not easy to hold off Mike Skeen when he’s in the same equipment as you, and it’s even harder to overtake him with only five laps to go. I made a small mistake on the last restart that cost me the lead of the race, and he took advantage of it, but hats off to the 3Dimensional Services Group team for giving us amazing cars. Today was a testimonial of how hard this team works and how good they are, so I’m really happy with today’s result.”

“I’m really happy to get up on the podium after yesterday’s qualifying, where we experienced a slipping clutch,” said Skeen following the race. “It was kind of a bummer to be starting towards the back of the top 10, but I made it up to the front relatively easily. After the red flag, I had a really good restart and went for the lead. It wasn’t quite enough, but it was a good day for the 3Dimensional Services Group team.”

Third-place finisher Merrill had an emotional moment on the podium.

“Being on the podium on a day like today, running in honor of Al Prieto, feels amazing,” said Merrill. It’s all about his name above the door, and I can’t believe I did it for Al. I’m also really grateful for BridgeHaul. They jumped on board with us this year, and they are a huge supporter of HP Tuners and the whole Mike Cope Racing group.”

Following the event, Matos was awarded the ChillOut Move of the Race for his pass on teammate Skeen in the closing laps. Robert Noaker earned the Omologato Perfectly Timed Move of the Race, and Doug Peterson won the TA2 Masters Award.

TA2 returns to the track at Charlotte Motor Speedway’s ROVAL on March 17-20. 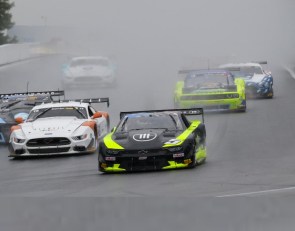 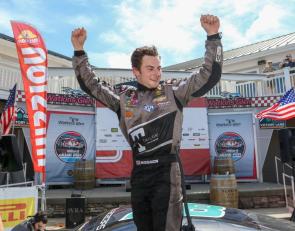