Sebastien Bourdais did not want to step out of the No.14 A.J. Foyt Racing Chevy after his first season with the team. The Frenchman and the small outfit made solid gains together in 2021, but at the behest of its primary sponsor, a change was made in favor of Indy Lights champion Kyle Kirkwood.

Barring a call for Bourdais to step into an extra IndyCar entry by another team later in the year, Kirkwood’s move into the No. 14 car all but ended the four-time Champ Car champion’s hopes of remaining in in the series. With that in mind, walking by the team’s pit box this weekend in St. Petersburg might give folks whiplash after seeing Bourdais leaning in to coach the kid who replaced him.

Rather than let hurt feelings or pettiness get in the way of assisting Kirkwood, Bourdais has been busy sharing his knowledge with Kirkwood at the circuit where he earned his first IndyCar pole in 2003 and won his last IndyCar race in 2019.

“I’ve known Seb for a long time and he was actually happy for me when he heard that I was going to be the one moving into the car,” Kirkwood told RACER. “He’s been a good mentor. Before this weekend, he talked to me a lot about the team aspects of how things work in IndyCar and how to prepare for my first IndyCar weekend.”

The 23-year-old was an impressive 12th among the 26-car field on Friday, and in Saturday morning’s practice session he improved to eighth. With a radio and headset to communicate with Kirkwood, Bourdais spent the 45-minute session on the timing stand, offering insights when possible and after the checkered flag, they spent time debriefing in the pits and continued the veteran-to-rookie download during the walk back to Foyt’s transporters.

“He’s doing an awesome job of just getting me up to speed and understanding the flow of practice,” Kirkwood added. “He’s made a lot of observations that the engineers are too busy to look at, and he’s been super helpful.

“He’s coached me through it all. And he’s also gives me a lot of pointers that I’ve never even thought about before in previous racing.”

For his part, Bourdais says it was a simple decision to help Kirkwood.

“Kyle’s a really great kid; super talented,” said Bourdais, who is volunteering his time and expertise. “When he asked, of course I said yes. There was no second thought about it.” 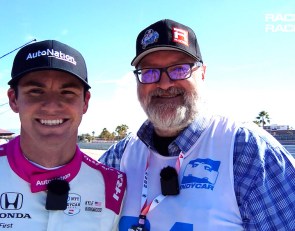