Power looking to leave ‘most disappointing’ year behind

Power looking to leave ‘most disappointing’ year behind

Team Penske’s Will Power is ready to put a troublesome 2021 season in the rearview mirror and work on returning to his usual state of competitiveness.

After he was promoted to full-time status by Penske in 2010, the Australian produced a remarkable record of 11 consecutive top five championship finishes; that string was broken last year when frequent adversity left the No. 12 Chevy entry holding an uncomfortable ninth in the standings.

If hits, crashes, failed spark plugs, brake issues, electronic gremlins and all the other issues from last year can be avoided, the 40-year-old is confident he’ll be in the mix when the 2022 title is decided.

“If had the pace in 2020 and 2021 with the crew that I had, very good stops and very good strategy, and everything, if we put those two together, we would absolutely be a championship contender,” Power said. “It’s just gotta be a year where all that comes together for me and I’m performing at my best, and obviously the little bit of luck that flows your way.

The 2021 season was undoubtedly strange for the Penske team as a whole. Josef Newgarden surged in the final rounds to lay claim to second in the championship, but the four-car squad was never close to winning the title. Reduced to three Chevy-powered entries with the departure of Simon Pagenaud, Power, Newgarden, and relative newcomer Scott McLaughlin are tasking with waging a stronger fight against IndyCar’s other big teams.

“I would say that we’ve come off one of our worst years in almost a decade, and the team put in a pretty big effort (during the offseason to improve),” Power said. “You certainly push each other; they’re both extremely good drivers. I can expect Josef to definitely be a championship contender. And Scott, it would be tough for him to contend for the championship in only his second year, but maybe he will. But certainly myself, if I’m doing everything right and putting it together, I expect to be running right at the front.”

Power hopes the new look for his Verizon No. 12 will be accompanied by a change in fortune. Michael Levitt/Lumen Digital Agency

Power, the 2014 IndyCar champion, has two years left on his Penske contract. He wants to capture another title before he’s done in the series and to get there, he’ll rely on the same habits that have produce 40 wins and 62 poles since his Champ Car debut late in 2005.

“When I get in the car, I do the same thing,” he explained. “The only thing that changes is your decisions in situations, and that comes from experience. You can have all the mindsets you want, but I’ve done all the work that the others normally do and maybe some more. I’m definitely fitter than I was last year, just mentally better these days; not much upsets me anymore. I don’t dwell on stuff very long because I’ve been around the sport too long. So I’ll be getting in the car and doing the same that I have done, and if I perform at my absolute best, that’s all you can do.”

Power took ownership of second place on IndyCar’s all-time pole-winning record at Portland in 2018 when he took the 54th of his career and broke a tie with A.J. Foyt. Since then, he’s moved the number up to 62, five shy of Mario Andretti’s 67. It’s another target on Power’s to-do list.

“I need five to be all-time on poles. Five,” he said. “That feels like it’s achievable. It is, no question. Question is, can I do it? I’m just one race at a time. You have to get a couple of good ones, lucky ones, like double Iowa pole, or you know. Texas pole, a couple of ones that just require a fast car, Indy pole. Few of these. Those sort of things is what will get it for me.” 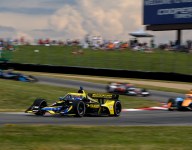