Kaylee Bryson has a chance to make history on Saturday at the 36th annual Chili Bowl Nationals.

The 20-year-old Oklahoma native wheeled the No. 71K Keith Kunz Motorsports Toyota to a win in her heat race, followed by a runner-up finish in the qualifier and then a sixth in the A-Feature during Tuesday night’s prelims. The result puts her solidly in the B-Feature for Saturday.

“You know, it was a pretty badass night for the Keith Kunz camp over here,” Bryson told RACER. “Won the heat race, second in the qualifier, started third in the feature. I think we’ll be sitting pretty good on Saturday. We’ll probably be pretty high in B-Feature. So, looking to make the A-main — that’s my main goal right now.”

This is Bryson’s third appearance in the Chili Bowl, with this result already putting her ahead of last year’s run when she climbed as high as the C-Feature on Saturday. It also marks the best-ever preliminary finish by a female, breaking the previous best mark of 10th that was set by Harli White in 2016.

“It’s definitely a pretty big honor to have,” Bryson said. “At the end of the day, I kind of look at we’re all racers and we’re all in our helmets. I don’t really think like, ‘Hey, I’m a girl, I drive different,’ or anything like that. I put on my helmet just like everyone else and I race a hard race. We earned the B feature and hopefully, we can earn more from that.”

Bryson has an opportunity for another record on Saturday. Currently, the best female finish in the history of the Chili Bowl belongs to White, who ended up 19th in the B-Feature in 2016.

“She’s had a really good Chili Bowl so far,” Kofoid said. “I think she practiced pretty good, and that’s kind of the first hurdle, really — seeing what you got going in your prelim night. You know, she’s aggressive enough where she can start from wherever — obviously gets to the lead in her heat race and won, which is huge.

“Your prelim night is three hurdles: the heat race, qualifier, and then trying to lock-in in your main event. She did a really good job in her qualifier to come from fifth and run second. Then, staying up front, especially on a track like this, and also on this night, I feel like this one of the hardest nights. I mean, they’re all hard, don’t get me wrong, but this night was tough with how the track was. It’s pretty cool.”

While she isn’t thinking about breaking stereotypes, Bryson is thinking about what she wants to accomplish when the Golden Driller trophy is on the line.

“As a race car driver, I think you always want to do better than you did last time,” Bryson said. “So every time I get in the car I want to improve and hopefully, we’ll be able to do that Saturday night and just make the A-Feature. That’ll be a pretty big honor to have.” 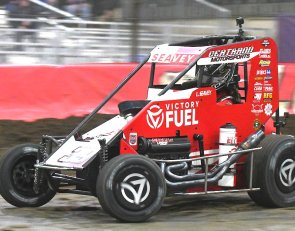