F1 insists no concerns despite freight delay to Brazil

F1 insists no concerns despite freight delay to Brazil

Formula 1 says there are no concerns that a freight delay will impact the running of this weekend’s Sao Paulo Grand Prix.

Poor weather led to freight from Sunday’s Mexico City Grand Prix being late departing, leaving up to half of the teams still awaiting the arrival of equipment, including some power units. While the delays are expected to extend into the middle of Thursday, F1 is confident there won’t be any issues with the event starting on time as planned.

“There were delays in freight departing Mexico on Monday due to the weather conditions, meaning some freight is still to arrive in Brazil,” a Formula 1 spokesperson said. “We expect this to arrive tomorrow with no wider impact on the race weekend.”

As it is a Sprint weekend, FP1 takes place at 12:30 p.m. local time, and with teams not likely to be able to push ahead with some work on cars and garages until Thursday afternoon, those affected are set to face an all-night shift to try and prepare in time for the first session. Qualifying then takes place at 4:00 p.m. local time on Friday.

A curfew is in place as part of the regulations, which means teams are not allowed to work on their cars for nine hours overnight on Thursday and Friday — ending three hours before the first running of each day — but they are allowed to break this curfew twice in a season before receiving a penalty.

While many teams agree there should be no impact on the running of the event, RACER understands some teams are frustrated by the lack of flexibility from F1 in terms of the schedule, with the need to pull additional hours in the middle of an intercontinental tripleheader not being well received by some. 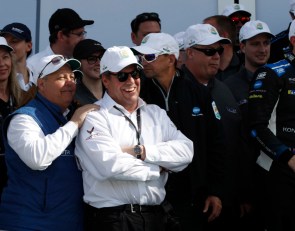