The Coliseum hits an important market for us - NASCAR's Phelps

The Coliseum hits an important market for us - NASCAR's Phelps

NASCAR’s visit to southern California and the L.A. Coliseum further took shape Tuesday with the rollout of the competition format. Racing in Los Angeles is important to NASCAR as president Steve Phelps said during Championship Weekend that it is “fertile ground.”

Officials will begin constructing a temporary quarter-mile oval asphalt track inside the Coliseum in late December after college football season is over. The L.A. Coliseum is the home of the USC Trojans.

For now, it will be the only NASCAR short track in the Los Angeles market. There are plans to turn Auto Club Speedway in Fontana into a half-mile track from a two-mile oval, but progress seems stalled. NASCAR is selling land around the track as the initial plan is for construction to start after the spring 2022 race.

“Us adding another half-mile racetrack in a very important marketplace for us, I’ll call it the L.A. DMA (designated market area), it’s important,” said Phelps. “We have more fans in L.A., in that L.A. DMA, than any other DMA in the country.”

Newly crowned Cup Series champion Kyle Larson is visiting the L.A. Coliseum on Tuesday as part of his media tour. As a California native, Larson is excited to compete at the Coliseum, and the industry continues to hype up the event.

“My expectation is we’re going to see an unbelievable crowd at the Coliseum,” said Phelps. “Many of those race fans, I would say 40 to 50 percent, probably will never have been to a NASCAR race before. Right now, the ticket sales are trending really well. Fifty percent of the people have never been to a NASCAR race. We want them there. We are going to expand the fan base.

“We’re doing it by meeting people where they are, whether that’s physically at a racetrack or through our mediums, whether it’s direct to consumer, over the air, radio, digital, social. We need to meet them where it is. Gaming. All of those things are important to the success of this sport. That’s why I think there’s such great opportunity for us (with the Clash).” 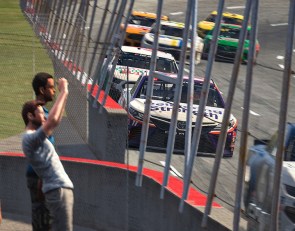