As IMSA President, John Doonan is responsible for the day-to-day operation of the sanctioning body, which sanctions seven different racing series in North America, including its flagship IMSA WeatherTech SportsCar Championship. Doonan joined IMSA in October 2019 after nearly 17 years with Mazda North American Operations, where he most recently served as the company’s Director of Motorsports.

Mark Rushbrook joined Ford Performance in 2014 as an engineering manager and became Global Director in December 2017. He oversees all of Ford’s racing initiatives in NASCAR, IMSA, NHRA and Formula Drift in North America and WRC and Australia Supercars overseas.

David Wilson is responsible for all TRD operations and activities in North America. These include engine engineering, manufacturing, administration,
chassis engineering, and operations. He oversees both of TRD’s facilities — the organization’s headquarters and engine operations in Costa Mesa, California, and the chassis/team support operation in Salisbury, North Carolina.

One Zoom link provides access to the entire week of webinars. Click here to register. There is no charge to attend. 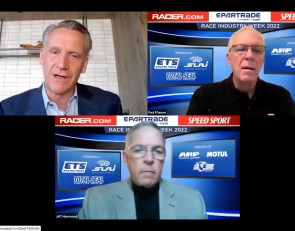