“Anybody that knows me knows that I’m a true racer, and I’ve always prided myself on the ability to get behind the wheel of any type of vehicle at any type of track and be competitive,” said Busch. “So I’m pumped for the opportunity to go wheel-to-wheel with some of the best rallycross drivers from around the world in Nitro Rallycross at Wild Horse Pass.

“Travis (Pastrana, NTX founder) has put a lot of time and effort into developing challenging courses and recruiting talented drivers to compete alongside him in this series. I’m appreciative of the invite to be a part of it, and I’m excited to get out there and see how I stack up against the competition.”

Nitro RX is a new test for Busch. The turbocharged 600 hp Nitro RX Supercars are all-wheel drive, and accelerate to 60 mph from a standing start in just 1.9 seconds at 1.5 G.

While still very much in the hunt for the 2021 NASCAR Cup title, Busch is eager to throw down at Nitro RX, where he will face off against an elite field of multi-disciplinary racers. In addition to Pastrana, Phoenix entries include Tanner Foust – the only driver in the world with victories in X Games, Global Rallycross, WRX, ARX and the European Rallycross Championship – and Scott Speed, a three-time X Games gold medalist, three-time Global Rallycross champion, plus an F1 and NASCAR veteran.

“I’m so stoked to get the word out that Kyle is going to compete in Nitro Rallycross,” said Pastrana. “From day one, this series was made by drivers for drivers in order to create a totally new type of motorsport – one that was challenging to race while at the same time thrilling for fans to watch. Having a champion of Kyle’s caliber get in the ring raises the game even more and introduces a new audience to Nitro RX. Once we get out on the track though, I know that both of us will have our eyes on that trophy.” 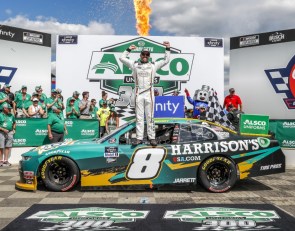