Max Verstappen made a claim to pole favorite for the Dutch Grand Prix with the fastest time of final practice at Zandvoort, comfortably ahead of both Mercedes drivers.

The Dutchman was quickest in every sector to set a time of 1m09.623s, gaining a little time thanks to a slipstream from teammate Sergio Perez out of the final banked corner.

Valtteri Bottas was next best, but the Finn was 0.556s adrift of Red Bull Racing’s benchmark, with Mercedes teammate Lewis Hamilton a further 0.2s behind.

Hamilton was among the busiest drivers of the session, having left pit lane at the top of the hour to make up for his lack of running in FP2 on Friday owing to a power unit problem. However, his two runs on the soft tire — which is expected to be the backbone of race strategy on Sunday — couldn’t bring him any closer to the top of the time sheet.

Sergio Perez finished the hour fourth in the standings and 0.903s slower than his session-leading teammate.

It was the first clear picture of relative form at the front of the weekend so far after several disruptions to Friday’s session, but Zandvoort kept up its 100 per cent red-flag streak into FP3 courtesy of Carlos Sainz, who put his car in the high barrier at the banked Turn 3 just 20 minutes into the hour.

Thankfully he is okay and gets out of his car. We are now under a red flag whilst we wait for the track to be cleared#DutchGP 🇳🇱 #F1 pic.twitter.com/PQCVaVpZQC

The Spaniard lost control of his Ferrari exiting Turn 2, the back stepping out suddenly and rotating him up the banked corner to make heavy left-rear contact. His left side struck first before the back of the car embedded itself into the wall in what could prove a penalty-attracting gearbox-breaking crash — assuming his car can be repaired in time to take part in qualifying.

After a delay of 11 minutes, the field piled out of the pit lane again, having left the track underutilized in the opening third of the session. The pace of the top four shuffled Fernando Alonso down to fifth to head a dense midfield. Lando Norris followed about a tenth behind in sixth despite the Briton finding the gravel at Turn 9 on his soft-tire run.

Aston Martin teammates Lance Stroll and Sebastian Vettel followed half a tenth further back and 1.2s off the pace, Vettel having survived a slide through the stones at Turn 10 that nearly put him in the barrier.

Charles Leclerc was caught out by the tailwind into Turn 11 and overshot the corner late, but the Monegasque regained control in the run-off area to finish ninth and 0.024s behind Vettel.

Pierre Gasly completed the top 10 a further 0.1s slower than Leclerc and only 0.008s ahead of Daniel Ricciardo.

Nicholas Latifi was 12th ahead of Esteban Ocon, who complained of an electrical deployment issue on his flying lap, and Williams teammate George Russell.

Nikita Mazepin finished the day 18th ahead of Alfa Romeo’s Robert Kubica — who is filling in for Kimi Raikkonen after the Finn tested positive for COVID-19 — and fellow Haas rookie Mick Schumacher. 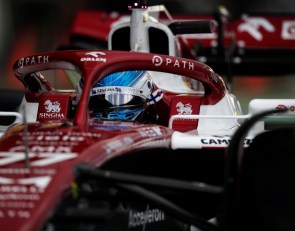