Reece Gold has been knocking on the door of Victory Lane all season. Less than a week shy of his 17th birthday, Gold, from Miami, Fla., this afternoon led from green flag to checkered flag to score a well-deserved maiden victory in the first of three races that will comprise the Indy Pro 2000 Grand Prix Presented by The Andersen Companies at New Jersey Motorsports Park. It was also the first win of the season for the recently renamed Juncos Hollinger Racing team, which guided Sting Ray Robb to the Indy Pro 2000 Championship Presented by Cooper Tires in 2020.

“I’ve had so many poles and podiums this season so to finally get the win feels great,” Gold said. “It was hard there at the end, that was good racing by Hunter. He kept the pressure on all race. You start thinking about it at the end: there’s so much pressure because there’s so much to lose, especially in the last five to 10 laps when the tires start to go and the field starts to close up. We held strong and came away with it. The team gave me a mega car as always. I’m so happy. Great points for myself and for the team as well, so we’re super excited.”

Eves back on top form with narrow Indy Pro 2000 victory

“Reece was on new tires and given how much this track eats up tires, that made a huge difference, though I was surprised how much I was able to run him down at the end,” McElrea said. “Considering the amount of bad luck we had in the middle part of the season, I’ll take a second-place finish and the points. I’ve come back from nowhere in the championship back to fighting for a podium in the final standings, but honestly, I’m not as focused on that now. Wins are all I care about now, so I don’t care if I have to be a bit more aggressive. The team has done an awesome job, the way we’ve come back the past few races. I know I can go for pole tomorrow and get two wins.”

For a season-leading fifth time this season, Gold secured the Cooper Tires Pole Award by virtue of posting the fastest time during qualifying this morning.

Gold led the field toward the starter’s flag at a very leisurely pace before jumping on the loud pedal and leading outside front row starter McElrea comfortably toward Turn 1. A strong early pace saw Gold extend his lead to more than two seconds inside the opening two laps. He also turned what was to stand as the fastest lap of the 25-lap race, earning The Ticket Clinic Fastest Lap Award for the third time this year and ensuring a maximum haul of 33 points from the day.

The gap from first to second grew to as much as 2.4s after nine laps. Thereafter, McElrea whittled away at the deficit as Gold continued to turn a string of consistent laps as the two leaders gradually extended their advantage over Rasmussen in third.

McElrea closed to within striking range of Gold with seven laps remaining but Gold was up to the challenge, managing his pace to perfection before taking the checkered flag just under a second to the good. In addition to claiming his long overdue maiden victory, Gold nabbed another PFC Award for Ricardo Juncos and Brad Hollinger as the winning team owners.

Rasmussen finished more than 7.6s adrift of McElrea in third having held off a late challenge from Jack William Miller, from Carmel, Ind., who made up two positions at the start to claim the best finish thus far in his rookie season for Miller Vinatieri Motorsports.

Jacob Abel (Abel Motorsports), from Louisville, Ky., also made a strong start, vaulting from eighth on the grid to fifth, where he remained to assure himself of his first Tilton Hard Charger Award.

Two more races will be held tomorrow on the 2.25-mile, 12-turn road course, with the starting positions for Race 2 to be decided during a separate qualifying session at 10:45 a.m.

Eves back on top form with narrow Indy Pro 2000 victory 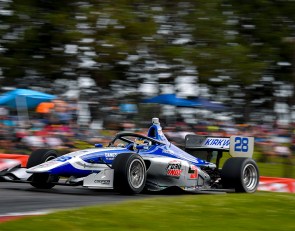