The second-generation racer joins father Bill Elliott, who won the 1988 Cup Series title. They are the third father-son combo to win Cup Series titles. Additionally, this will be just the second time the father-son duo have competed together on the same track, with the other coming on Oct. 20, 2013 in a Late Model race at South Alabama Speedway. On that occasion, Chase took home the trophy, while Bill finished fourth.

“Racing is such a big part of our lives and I’m genuinely excited to compete with my dad in the SRX race at Nashville,” Chase said. “We’ve been together at racetracks hundreds of times and only once before have we competed on the same track together. It’s an awesome opportunity and I’m really looking forward to it.”

The half-mile speedway in Nashville is familiar ground to the Elliotts. Chase captured the prestigious All American 400 in 2013. Meanwhile, Bill has a best finish of fifth (1983) in seven Cup races.

“My experience at Nashville is pretty dusty, so I might have to lean on Chase to give me some pointers from his time there in a Late Model,” said Bill, one of 10 regulars in SRX. “It could be a bit of a role reversal with him teaching me.

“But it truly is a wonderful opportunity to be able to race with my son at Nashville. Obviously, I’m incredibly proud of all that he’s accomplished. For years, he watched me and now I’m watching him. But for one night in Nashville, we’ll both have the same viewpoint.”

Ray Evernham, co-founder of SRX, is familiar with the racing family, with Bill having raced for him from 2001-05 in the NASCAR Cup Series. They won four races together, including the 2002 edition of the Brickyard 400 at Indianapolis Motor Speedway.

“Bill and I worked together for five years at Evernham Motorsports and Chase was always around during that time,” Evernham said. “Bill was instrumental in helping get our race team established and competitive, and Chase saw his dad’s work effort firsthand. It’s an understatement to say how cool it’s been to see Chase grow up and become such a great racer. The apple didn’t fall far from the tree.”

The Camping World SRX Series will race at Slinger Speedway in Wisconsin this Saturday night prior to capping off its inaugural season at Nashville. 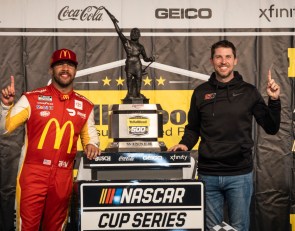 Next year could well be a banner year for the H-Modified Racing Club, whose vintage cars and drivers already are making travel plans to (…)