It wasn’t that long ago, David Wilson can now admit, that maybe he wasn’t as critical or 100 percent honest with himself about Toyota’s performance level in the NASCAR Cup Series. After Martin Truex Jr. won at Darlington Raceway on May 9, Wilson was thinking, we’re OK.

The president of Toyota Racing Development now sees that isn’t the case.

“We are clearly in chase mode,” Wilson (pictured with Denny Hamlin, above) told RACER. “While I will always prefer to be out front, and be looking in the proverbial rearview mirror, sometimes it’s easier being in chase mode because you know where the target is.”

Like the rest of the Cup Series garage, Wilson acknowledges Hendrick Motorsports — specifically Kyle Larson’s No. 5 team — is the target. Since Truex’s win at Darlington, it’s been all about Hendrick. The organization is on a five-race winning streak, with the last three victories coming from Larson.

During that stretch, Hendrick drivers swept the top four spots at Dover and then finished 1-2 at COTA, Charlotte, and Sonoma. In the last five weeks, the five Toyota drivers have combined to lead 54 laps.

“Those that know our culture and how we operate, our intensity level is a 10 out of 10,” Wilson said. “The competition meetings the past couple of weeks have not been fun, and the frustration across the board mounts every week. All you have to do is tune in to that 18 car (Kyle Busch), and he’ll give you a running commentary any given Sunday, and we wouldn’t expect anything less because we expect more of ourselves.

“We’re pissed off at where we are, and we certainly don’t accept it. It’s not what we accept of ourselves.”

Toyota had plenty to celebrate early on, including Truex’s victory at Phoenix, but the going soon got a lot tougher. Matthew Thacker/Motorsport Images

It’s been a baffling year for Wilson’s troops. The Toyota group felt they’d come out of the gates strong and firing on all cylinders, with Denny Hamlin’s consistency building an impressive point lead and early wins by Christopher Bell on the Daytona road course and Truex at Phoenix. Toyota led the way with five wins in the first 12 races, with their drivers leading all the laps.

“(We were) kind of feeling like, ‘OK, we’re getting a groove on, this feels right,’” Wilson said. “It felt like we upped our game from 2020, which was not a great year. It was an OK year. Then what seemed like overnight, but it never is, the wheels have fallen off the past five weeks, and of course, we know who’s been running up front the last five weeks; it’s been one organization.

“I have a tremendous amount of respect for what Rick and company have done over there at Hendrick. It’s so hard to do. We all know in this sport there are no magic bullets, and it’s a combination of everything.”

Here are the positives: Toyota has no pressure of its drivers making the playoffs. Bell, Truex, and Busch are locked in on wins. While his lead has dwindled from over 100 points on second place to just nine, Hamlin is still in a safe spot. Wilson’s target was the four Joe Gibbs Racing drivers making the postseason, and that target should be hit. Plus, Wilson still looks at the next nine races as a chance to catch up and figure out where Toyota is missing things.

“The 19 (Truex) team in particular. You listen to (crew chief) James Small on the radio…James was mentored by Cole Pearn, and Cole had the reputation of being a bit of a cowboy. They’re not afraid to take some pretty wild swings at the car. The past couple of weeks, James halfway in or earlier he’ll say, ‘Martin, yeah, this is on me. We messed up.’ They tried something, and that’s OK because you learn things from doing that.

“But at the same time, what we can’t forget is that we are representing partners every time we go racing, and to run the way we’re running right now, it’s just unacceptable. So, our heads are down, and we’re going to do our damnedest to turn this around.” 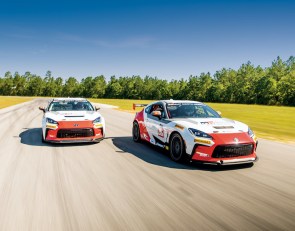