The No. 15 BSport Racing Aston Martin of Kenton Koch and Bryan Putt broke NOLASPORT’s reign on the Pro-Am division and claimed their first victory of the season in a hectic and action-packed Round 6 from Virginia International Raceway.

“I’m overwhelmed, I had tears out there,” said Putt. “The team is fantastic and I couldn’t be happier, I’m thrilled.”

“I’ve been working with Bryan for five years now and it’s an incredible feeling for the team,” said Koch.

John Capestro-Dubets and the No. 52 Auto Technic BMW led the field to the green flag with Kenton Koch’s No. 15 BSport Aston Martin leaping from third to second around the No. 119 BMW as the field approached the technical turns 3-4-5 complex. Bill Auberlen and the No. 34 BimmerWorld BMW M4 GT4 and Spencer Pumpelly in the No. 66 TRG LaSalle Solutions Porsche would slot into fourth and fifth overall as Pro-Am competitors sat in positions 1-6 at the start of the 60 minute competition.

Ten minutes into the race saw misfortune for some front-runners as Auberlen’s No. 34 BMW would hit pitlane to an apparent engine issue while running fourth overall and Saturday’s winner Christian Syzmczak’s No. 72 Murillo Racing Mercedes-AMG would stop on track while leading in the Silver class, bringing out the first full course caution of the day handing the Silver-class lead to the No. 71 KTM of Mads Siljehaug.

The race went back to green with 46 minutes left on the clock and would see the No. 15 Aston Martin slip past the No. 52 for the overall and Pro-Am lead going into Turn 3 with the No. 119 remaining third overall and the No. 66 fourth.

On the next lap Aaron Povoledo’s No. 88 Mercedes-AMG would get past Pumpelly going into T1 while just ahead the power of the BMW would see the second-place No. 52 BMW re-challenge Koch’s No. 15 Aston Martin for the lead as the No. 119 BMW of Gregory Leifooghe stalked in third.

Six minutes later the No. 52 would use the straight line advantage of the BMW and slip stream past the No. 15 for the overall lead down the back straight named Madison Avenue as the two leading machines would continue their back and forth battle.

As the pit window for required driver changes closed with 25 minutes remaining, the No. 15 BSport Aston Martin, now with Bryan Putt driving, took over the overall and Pro-Am lead with a perfect pit stop with the No. 66 TRG Porsche, with Derek DeBoer driving, running second and the No. 119 Stephen Cameron BMW, now with Sean Quinlan behind the wheel, sitting third.

With 21 minutes left on the clock, the No. 119 and No. 66 would make contact going into Turn 1, spinning the No. 66 with the No. 119 continuing second overall and No. 52 BMW of Tom Capizzi third. Championship leaders in the No. 47 NOLASPORT Porsche, now with Matt Travis piloting, would move into fourth overall after starting the race 12th.

On the next lap, however, the No. 119 would pull off course due to an apparent issue caused by the contact on the previous lap, giving second place to the No. 52 and third overall to the No. 47. Later in the lap the Silver-class leading No. 71 would spin off track at the upper esses, giving the class lead, fourth overall, to the No. 11 Classic BMW M4 GT4 of Stevan McAleer. Soon thereafter the second safety car of the day was called as the No. 34 BimmerWorld entry stopped on track, taking away a 7s advantage the No. 15 had at the front of the field.

The race went back to green with 10 minutes remaining with the Putt-driven Aston Martin getting a great jump on its rivals with the No. 11 BMW moving from fourth to second overall, still first in Silver. The No. 52 BMW would slide off track at Turn 4, dropping through the field with the No. 47 of Travis inheriting second in Pro-Am and No. 66 of DeBoer third in class, fourth overall.

A third safety car was called as the No. 71 KTM and No. 24 Heart of Racing Aston Martin would collide at Turn 1, giving massive damage to the KTM, ending their race. Prior to the safety car, the No. 16 Capstone Mercedes of Kris Wilson would get past the No. 68 Smooge Racing Toyota for the Am lead with a daring inside pass at Oak Tree.

The race would end under caution giving the overall and Pro-Am victory to the No. 15 Bsport Racing Aston Martin with the No. 47 NOLASPORT Porsche second and No. 66 TRG LaSalle Solutions Porsche third.

The No. 11 Classic BMW entry would claim the Silver class win with the No. 22 CCR Racing/Team TFB BMW second and No. 94 BimmerWorld BMW third in class.

The Am win would go to the No. 16 Capstone Mercedes with the No. 68 Smooge Racing Toyota second and No. 98 Random Vandals BMW third. 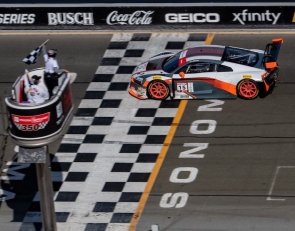