Hendrick Motorsports’ William Byron believes tonight’s eNASCAR Pro Invitational Series from the virtual streets of Chicago is in some ways a test race as NASCAR looks at the viability of adding the street course to the schedule in the future. The usefulness of the race could be hampered by how much practice drivers put in and the approach they take, however.

“It is [a test] in some ways. It really comes down to how many guys take the time to practice, and you never know how many guys are going to practice it,” Byron said. “For us, hopefully, we do put on a good race. I think that concept itself is a good one. We just have to have a track that is wide enough and good for our cars, but it could be good.”

Byron turned his first laps on the Chicago street course last night. Byron will be racing from the Fox Sports studio as part of the broadcast team for the race.

“I made some laps actually last night for the first time and spent a couple of hours on it, and felt like it was pretty cool,” he said. “It was definitely hard to drive, but it’s a cool concept. I think it’s something that could gain some traction in the next year or so to hopefully have a street course race.”

The 2.2-mile street circuit through Chicago on Lake Shore Drive was developed by iRacing in partnership with NASCAR, and is one of two major publicly-known track development projects iRacing and NASCAR are working on. The other is the redevelopment of Auto Club Speedway into a short track.

If NASCAR is interested in seeing how the track races, that is something iRacing is more than capable of doing. iRacing Executive Vice-President Steve Myers spoke with RACER about the Auto Club redevelopment project and said that they have been holding secretly-broadcast races on the redesigned Auto Club for NASCAR officials to watch.

“We’ve set up legitimate races with our Coke Series drivers, the best NASCAR sim racers in the world,” he said. “We’ve gotten them involved in testing. We will set up a broadcast specifically for NASCAR management while they’re all sitting in a conference room or at home watching these guys.

NASCAR and iRacing have taken a similar approach to the design of the Chicago street course. Myers said that his team has put thousands of hours into designing and testing different configurations for the Chicago circuit.

That work will be showcased tonight as cars take to the new track for the first in public. Coverage begins at 7 p.m. EST on Fox Sports, with the race set for 8 p.m. EST. 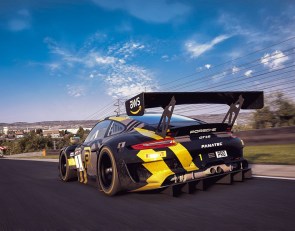