Kevin Harvick called racing in the rain at Circuit of the Americas “the most unsafe thing” he’s ever done after bad visibility resulted in a slow Harvick being run into from behind.

“It’s the most unsafe thing I’ve ever done in a race car by a lot. You can’t see anything down the straightaways,” Harvick said. “These cars were not built to run in the rain and when you can’t see – my spotter said, ‘Check up, check up,’ because he thought he saw two cars wrecking. I let off, and the guy behind me hit me wide-open because he never saw me.

“It’s unbelievable that we’re out there doing what we’re doing because we’re in race cars that aren’t made to do this, and if you can’t see going down the straightaway, it’s absolutely not safe. Not even close.”

Harvick exited the inaugural EchoPark Automotive Texas Grand Prix after 19 laps. Although Harvick initially drove his heavily damaged Stewart-Haas Racing Ford Mustang away from the accident, an oil leak forced him to the garage.

The crash occurred on the backstretch, a high-speed section of the course with standing water. The spray from the cars has reduced visibility. Harvick was running behind the cars of Ryan Blaney and Christopher Bell, who could have been the drivers that Harvick’s spotter was watching. Bell ran into the back of Blaney and went spinning, which ended his day.

.@NASCARONFOX rides with @KevinHarvick as the No. 4 gets hit early in Stage 2. (📺: FS1) pic.twitter.com/HhJG27zsiw

Darrell Wallace Jr. was the driver who then ran into the back of Harvick as he was slowing down. Blaney continued with right rear damage as Bell, Harvick, and Wallace retired from the race. Wallace declined to comment on the crash, but crew chief Mike Wheeler said while it is not raining hard, it is hard to see too far ahead.

“We don’t have any business being out in the rain, period,” said Harvick.  “All I can say is this is the worst decision that we’ve ever made in our sport that I’ve been a part of, and I’ve never felt more unsafe in my whole racing career, period.” 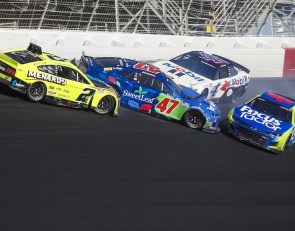