Rod Campbell, who passed away in March of 2020, left behind a legacy that will be difficult to rival. Not only the success that he achieved personally, but the large number of people that he mentored and launched into their own orbits of business success. A founding group of Sean Jones, Townsend Bell, Jeff Swoboda, Jason Campbell, David Scheinberg, Steve Madincea, Chris Lencheski and Paul Pfanner hope to continue Rod’s legacy with the new Rod Campbell Award.

“Rod was extremely special in that he had such enthusiasm for providing opportunity and mentorship for others,” explained Jeff Swoboda. “When you look around the motorsports industry those results speak for themselves in how many executives and key figures got their start with him. This award program will help to continue that legacy and develop talent that we will see contributing to the industry for many years to come.”

The Rod Campbell Award has been established to perpetuate a launchpad of opportunity for young professionals approximately 18-23 years of age looking to begin successful careers in the automotive and motorsports arenas. The first award winner will receive 4 to 6 weeks of paid apprenticeship style experience in companies run by Rod’s proteges.

The winning candidate will be chosen by a panel made up of automotive and motorsport executives and gain paid experience with the companies listed during the summer of 2021. These companies include 7R Events, Bryan Herta Autosport, Fantastec, Phoenicia Sports & Entertainment, Racer Media & Marketing and Short Shoot TV amongst others in the motorsports industry.

Launch Date:
The deadline for submissions is May 21, 2021 with internship to commence this summer.

Swoboda continued, “Imagine adding to your resume that you worked at Bryan Herta Autosport, RACER Magazine or in the production of a major live sports broadcast. It is a great launchpad and should provide opportunity throughout various sectors of the motorsports and automotive ecosystem.”

Racing cultivates a lot of self-absorbed people, but it’s the self-made ones from the good old days that are always the most interesting.

Rod Campbell, who passed away in March of 2020 at the age of 88, came from nothing and earned his way to a position of power and respect in auto racing with an insatiable work ethic, a good business mind and an infectious personality. He may well have been the first to connect marketing and motorsports during a fascinating career that intersected with Stirling Moss, Jackie Stewart, Bernie Ecclestone, Morris Nunn and the Ford Motor Company.

“Rod had one of the most interesting stories I’ve ever run across,” said noted motorsports author Pete Lyons, who penned Campbell’s life story in between writing his Can-Am, Riverside, and Lotus 72 histories. “He didn’t want to make the book a commercial project, he just wanted to write it for his family and friends. It took seven years, but I’m so glad we did it.”

Born into a family of three sisters and a brother with no car, Campbell moved from Saskatchewan to Toronto to pursue music. He roomed with a young singer named Robert Goulet and that convinced him he didn’t have the pipes to make that his life’s work, so he decided to be a radio announcer.

But while serving in the U.S. Army in Germany, he wandered over to the Nurburgring to check out a sports car race and then returned to watch Formula 1. He was hooked on the ground-pounding sound and derring-do of one Stirling Moss.

“Rod got to say hello to Moss walking into the infield, and said that was one of the great days of his life,” said Lyons.

His next step was Montreal, where a broadcasting school led him to hosting a radio show and unveiled his calling. “He had to sell ads to support his radio show, and found he could pound the pavement and make cold calls and sell people,” said Lyons. “It was a hard education, but he got good at it.”

Campbell’s next couple moves earned him the love of his life.

“He couldn’t afford it but Rod bought a Porsche because he felt like he needed to be seen in a nice car,” continued Lyons. “He also thought it was important he looked good, so he had his clothes tailored. And that caught the eye of Sandra, who eventually became his wife.”

His initial racing job came in 1966 when Can-Am was sponsored by Johnson’s Wax. Rod was doing some work for Johnson’s, and that led to helping promote the races. He would take Moss, who was retired by then due to injury, into the cities hosting Can-Am a week beforehand to promote the races.

By the early ’70s, Can-Am was king of American road racing, and Campbell wound up helping Carl Haas’ L&M Lola (driven by Stewart) and did advance work for newspapers and TV stations with JYS as they barnstormed the country publicizing the races.

It was during this decade he befriended and became partners with Nunn, a former racer turned designer/team owner that went into F1 with big dreams and a small budget. “Rod found money and helped keep us on the track,” recalled Nunn, whose Ensign cars were driven by Clay Regazzoni, Chris Amon and Derek Daly, back in 2007. “We would have had to close the doors without him.”

The best connection Campbell had made during the decade was with FoMoCo. He was doing contract work when he proposed to become their exclusive PR machine. And in 1982, Campbell and Company was formed in Dearborn, Mich. Thirty-eight years later, it’s got 100 employees and is still going strong.

“He’d read a book as a poor kid called ‘Think and Grow Rich’, and when he sold Campbell & Company for a nice chunk of change it completed his dream,” said Lyons. “I never met anyone who was always on the go like Rod, and he made it all on his own.”

Townsend Bell, the racer/NBC announcer married to Rod’s daughter Heather, said after he’d told the family he didn’t have long to live that Stewart and Ecclestone had called to say goodbye. “That really made him feel good,” said Bell. “To think they hadn’t forgotten him.”

With a perpetual smile and pleasant personality on top of his marketing prowess through the years, Campbell was pretty unforgettable. 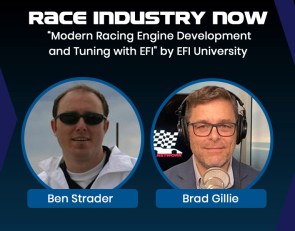