…Alex Palou picked as the winner of Round 1 with Colton Herta in P22 and Josef Newgarden in P23?

IndyCar, like most racing series, has a few deficiencies to resolve (we’ll save the bizarre and aimless new ‘Defy Everything’ marketing campaign for another time), but we can say with great confidence that it does not suffer from predictable outcomes.

Turn the Honda Indy Grand Prix of Alabama results sheet upside down and the last three drivers could easily form a podium of Ryan Hunter-Reay, Newgarden, and Herta. Focus on the middle of the finishing order and there are some drivers and teams that fell well short of expectations. And up front, we’ve started the season with a celebration of the theme of the 20-year-olds trying to retire the 40-year-olds.

We’ve only put one race in the books and it already feels like the season is off to a wild start. Palou adds to an impossibly deep pool of talent that can win each event, and now he heads to St. Petersburg with plenty of adoration. And, for the first time in his brief IndyCar career, a target on his back and the question of whether he can remain up front in his second race with Chip Ganassi Racing…

Arrow McLaren SP did everything but win at Barber. One of the biggest takeaways from the event is how AMSP came within one strategy call of knocking the Big 3 off their perch. It was pole, fastest lap in the race, and while P4 wasn’t a victory, the team’s progress during the off-season was hard to ignore. If what AMSP showed at Barber can be repeated, the rest of the field should be worried.

I’ve been giving out this post-race award for more than a decade, and at times, it’s a toss-up between a few drivers who visited agony upon their rivals through a mistake or misfortune. The recipient of the first TGBB of the 2021 IndyCar season might be among the easiest decisions so far, though, thanks to Josef Newgarden’s opening-lap oops at Turn 4.

When the photos and videos of a multi-car crash look exactly like the guilty party actually bowled a strike, the award gives itself away to the winner.

Let’s add a new category with the Chicken Salad Report to honor the teams and drivers who turned chicken poop into chicken salad.

Graham Rahal leads the list after Barber for hauling his No. 15 Rahal Letterman Lanigan Honda from the depths of misery after qualifying P18 to P7. No team looked more lost than RLL after the opening day, and while his teammate Takuma Sato only made it from P19 to P13, Rahal and his team worked wonders to transform the No. 15 machine overnight.

Similar kudos go to A.J. Foyt Racing and Sebastien Bourdais who, like Rahal, improved 11 position on Sunday to claim P5. The Foyt team wasn’t as lost as RLL on Saturday, but there was a definite state of confusion after Bourdais was a rocket in recent testing at Barber and the team was unable to summon it at will. Much respect to both teams for the huge turnarounds.

Palou’s unanticipated win garnered the most publicity last weekend, but I’d point to the Indy Pro 2000 victory by Braden Eves as the biggest deal at Barber. Less than one year removed from the mechanical failure that sent his Exclusive Autosport entry flying backwards on the IMS road course before crashing upside down and causing fractures in his neck, the Ohioan returned in style with a win on Friday.

The 2019 USF2000 champion is back and performing just as expected, and after Eves, there was no shortage of Road To Indy excellence on display across all three series. At the top, there was a wonderful statement made by the HMD/GRG team when Sweden’s Linus Lundqvist won Indy Lights Round 1 and his Chicagoan teammate David Malukas captured Round 2. We’ve become so accustomed to Andretti Autosport owning the top step of the Lights podium that the major flex by HMD/GRG has added a fascinating new wrinkle to the start of the season.

In fact, with Benjamin Pedersen leaving Barber with a P2 and a P7, HMD/GRG holds first (Lundqvist), second (Malukas), and fourth (Pedersen) in the standings. Andretti’s Devlin DeFrancesco, its leading performer with a pair of thirds, is third in points while reigning Indy Pro 2000 title winner Kyle Kirkwood had a scrappy debut and heads to St. Petersburg seventh in the championship.

Following Eves’ win, Kiwi-American Hunter McElrea from Pabst Racing took the second Indy Pro 2000 race, and in USF2000, it was a pair of young Americans in Yuven Sundaramoorthy from Pabst and Prescott Campbell from DEForce who got the jobs done in Rounds 1 and 2, respectively.

What’s the thing to know about the RTI after season opener? As Dan Andersen, his daughter Michelle Kish, and the many fine people at the RTI have ensured for more than a decade, there’s tons of talent working its way towards IndyCar.

Which driver was at the Barber race but not necessarily in the Barber race? Team Penske’s Simon Pagenaud had a weekend that was most unexpected by trailing his three teammates in every session on Saturday, having the lowest starting position in P15, and finishing a mostly anonymous P12. He was bullish about coming into 2021 with renewed focus and fire, and he’ll have a chance to channel it into a worthy result it in a few days at St. Petersburg.

AMSP’s paddock setup looks ominous, but it was O’Ward’s speed at Barber that will have rival teams worried. Abbott/Motorsport Images

Compliments to the NBC Sports broadcast team in the booth and on pit lane. Paul Tracy stood out with sharp observations and a lot of positive energy, and behind the scenes, there were many new people in charge of directing and producing the show who maintained the high-caliber output established by their predecessors.

The only item I found lacking was a Jon Beekhuis type to focus solely on race strategy, stint lengths, tire strategy, and all the interesting chess moves that warrant having one member of the team locked into those threads and nothing more during the contest. Jon’s been missed for a while now, and while others try to cover some of the strategy and tech elements at play, Beekhuis remains the best person for the job.

I feel guilty writing Ryan Hunter-Reay’s name here. Again. After the first race. Again. It happened in 2020 to open the season at Texas when his car wouldn’t fire and he was penalized for receiving help from Honda. And it happened in 2019 at St. Petersburg where engine problems took him out after 19 laps of the 100-lap race, and left the No. 28 Andretti Autosport Honda next to last in the championship.

So, naturally, the IndyCar driver most heavily associated with the cartoon anvil gets hit by the thing on the first lap of the 2021 season when Newgarden spins and wipes out a handful of drivers…

Suggestion for 2022 and beyond: Skip the first race of the year, RHR.

* Felix Rosenqvist had a nightmare debut for AMSP. A crash in FP1, a spin, stall, and poor position earned in qualifying, and then an innocent member of Newgarden’s TGBB moment on lap 1. Let’s hope to ultra-talented Swede can reboot and get back to being a badass.

* Nice styling touch on the CGR cars with the colored bands applied to the wheels.

* Whenever NBC Sports offers in-car views for Pato O’Ward, Alexander Rossi, or Scott Dixon on road and street courses, be sure to stop what you’re doing and watch every moment. All that’s missing is rapid-fire kung-fu sound effects of their hands cutting through the air as they make a million micro corrections to the steering wheel in their dance on the edge of adhesion and calamity.

* The purple livery on Romain Grosjean’s car is easy on the eyes.

* Surprising thing I learned from Palou after the race: There was no post-race partying; he’s not keen on alcohol and has never been drunk. Wait until Dixon and Franchitti learn this and make it their mission in life to leave him hunched over a toilet bowl after his next win… 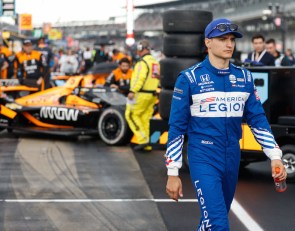