Formula 1 launched its 2021 season last weekend while NASCAR tried to return to its roots on dirt, only to be rain-delayed to Monday. Although the delayed NASCAR show — which aired on the FOX broadcast network while F1 was on cable — still managed to win the motorsports TV ratings honors for the week, F1 still stood tall with its highest-rated race ever on ESPN2 and the largest F1 audience since 2019.

F1’s Bahrain Grand Prix on ESPN2 averaged a 0.53 Nielsen rating and 879,000 household viewers. That was up from a 0.44/711,000 for the 2019 version of this race — the last run on the same weekend, when it was the second race of the season and also on ESPN2 — and a huge step forward from the 0.31/500,000 for last year’s Bahrain GP that ran in late November, again on ESPN2. The numbers climbed as the race progressed, with over a million viewers tuning in for the tense closing laps, according to ESPN.

While it’s not really a direct comparison, last year’s pandemic-delayed F1 opener — the Austrian GP that ran in July — averaged 0.48/752,000 on ESPN.

When it finally got to run Monday, the NASCAR Cup Series race at Bristol averaged a 1.8 rating and 3.1 million viewers on FOX. While those are understandably off Cup’s usual weekend numbers, they correspond pretty closely to the 2.1/3.36m for the 2020 June race at Talladega race on FOX, which was also rain-delayed to Monday.

The NASCAR Camping World Truck Series also was delayed to Monday for its Bristol dirt debut, and averaged 618,000 viewers on FS1 (rating number was not available). That was down only slightly from the 654,000 who watched the trucks last time out on a Saturday in Atlanta on the same channel.

Virtual NASCAR was back on FS1, too, in the NASCAR iRacing Series which also staged a race on the digital dirt of Bristol last Wednesday. It averaged a 0.18 rating and 292,000 viewers. 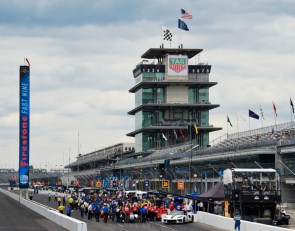