Ed Carpenter Racing’s Rinus VeeKay continues to demonstrate the speed and potential shown during his Rookie of the Year campaign. The Dutchman posted the fastest lap of the 12 NTT IndyCar Series entries in attendance on Tuesday for a private test at Barber Motorsports Park in Alabama, and based on the slim margin of 0.960s that separated the field on the 2.4-mile road course, there will be no lack of competitiveness when the series returns in April for its season opener.

Behind VeeKay, A.J. Foyt Racing’s Sebastien Bourdais gave his team more reasons the feel optimistic about its chances in 2021, and in third, Bourdais’ former Champ Car teammate Graham Rahal was the lone interloper for Honda towards the top of the timing sheets. Rahal also led his rivals with a high of 144 laps turned on the day. Team Penske’s Will Power and ECR’s Conor Daly completed the top five.

Of note, former Formula 1 driver Romain Grosjean turned his first laps in an Indy car. Barring a minor off in Turn 1 that cost about an hour of track time, his Dale Coyne Racing team got the car cleaned and readied to venture out just before the lunch break, and in the afternoon session, the Frenchman reduced the gap to the leader to under one second, and closed the test +0.09s behind his veteran teammate Ed Jones. 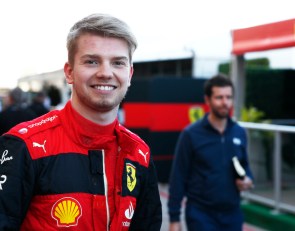