Christopher Bell will let others decide if his triumph on the Daytona road course was a statement win, but Bell knew transitioning back into Joe Gibbs Racing this year was big.

“I knew going to Joe Gibbs Racing that this is my time,” Bell said. “I’m either going to put up or shut up. I’m very grateful for how it’s played out so far between the first two weeks.

“It’s a dream come true to be able to drive for the Coach, have all of our great partners. Those guys are who made it happen. I just want so bad to be in this No. 20 car for the rest of my career. I need to perform well to do that. I just got to stay after it.”

Gibbs chose Bell over Erik Jones. It was a decision the Hall of Fame team owner had to make after Bob Leavine, who was fielding a car for Bell, decided he was selling his team and closing up at the end of last year. Bell was brought back in-house and paired with two-time champion crew chief Adam Stevens for his sophomore Cup Series season.

Sunday, Bell won in his 38th start. He led the final two laps after chasing down Joey Logano and making the winning pass coming out of the frontstretch chicane.

.@CBellRacing drove the perfect 3.61 miles with everything on the line.

Relive the final lap at the @DAYTONA Road Course. pic.twitter.com/gXK0GCC30x

“It’s a huge deal for us,” Gibbs said. “To have Christopher, everything that he kind of fought through last year and then to come back this year. When you think about it, Christopher got in that car last year and never made a lap and was going to racetracks. It was a lot to overcome. And he did show speed at a number of racetracks.

“It was great for him to get that victory. … To have Christopher already in the playoffs, it’s a big deal for us, for sure. It’s hard to do, put it that way.”

Win in hand, Bell will be in the postseason for the first time. The No. 20 team did not make the playoffs last year.

In 2020, Bell also failed to make the playoffs, finishing 20th in the standings with four top-10 finishes and 18 laps led. Through the first two weekends of the ’21 season, Bell has led 37 laps.

Over the team radio after the checkered flag, Stevens told Bell and the team how proud he is of all their work. Stevens also said it was going to be a fantastic year. And while he didn’t expect to win with Bell in their second race together, Stevens is confident they can now get a few more before the year is over.

Bell is also eager for what’s ahead.

“This is the happiest moment I’ve had in a very long time,” Bell said. “2020 was one of the hardest seasons I’ve ever had in my racing career. I think I won a race at the Chili Bowl on my prelim night, and that was it for the rest of the year. That’s obviously up against the Cup guys and on the dirt side, too. 2020 was a really, really low point for me.

“To be able to come back in ’21 and win in the Cup Series this early on a road course is something that I’m going to cherish for the rest of my life. Yeah, just can’t wait to see what we can do on the ovals and build on this.” 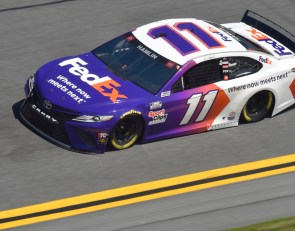 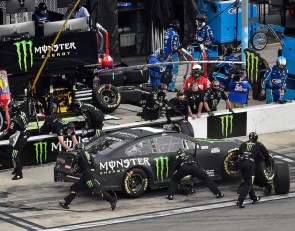