Justin Marks is never short on words. Those words come fast when he gets talking, and his answers are usually lengthy and peppered with detail. Ask about how Trackhouse Racing Team is mostly flying under the radar and seemingly overlooked in the silly season hype, though, and Marks is just fine with brevity.

It’s been a hectic silly season. Ten drivers took their seats elsewhere, and the schedule got a bit of a makeover. While some teams have disappeared from the garage, others like Marks join the circuit, and it is here where most of the excitement has been on the big name that is Michael Jordan and the expectations around his 23XI Racing.

At Trackhouse, Marks, Daniel Suarez, and crew chief Travis Mack focus on their group and their cars. Marks wants the performance on the track to do the talking.

“I’m taking a long view on this stuff,” continues Marks. “I’m not trying to make a big splash and trying to take all the media bandwidth as quickly as I can right now and get everyone talking about us. I want to be in this sport in five years, 10 years, 20 years from now, and I think when we win our championship seven years from now, no one is going to remember what the first couple of weeks of this race team was like.”

Speedweeks in Daytona is three weeks away, and Trackhouse is in a good spot. The Daytona 500 car is in the wind tunnel, and the road course car is close to being complete. It won’t be long before the attention turns to preparing a piece for Homestead-Miami.

A technical partnership with Richard Childress Racing gives Trackhouse and Marks the advantage of working on cars and competition. It eliminates worries about a shop buildout, figuring out how to hire people, or acquiring assets. Trackhouse is based on the RCR campus.

When announcing the team, Marks insisted that it will have the budget required to be a playoff-contending team. The statement doesn’t come from ego or any kind of narcissism, but simple confidence.

“I truly believe we’re going to be in the conversation of people that are going to be fighting for the last spot or two,” says Marks. “It’s not a failure if we’re not. But if you really take a deep audit of the competition landscape and you look at Daniel’s history and what he’s done when he’s sat in capable equipment, and you look at where Chevrolet is and where they’re going, and at the new relationship between Hendrick engines and ECR, you put it all together, and to me, it looks like a very competitive scenario. It’s my job to make sure everybody works well together and stays motivated, and stays focused on the task at hand.

“But I’m cautiously optimistic that we’re going to be a very competitive outfit in our first year.”

Suarez is resetting once again. His Cup Series tenure has been short and rocky, with stops at Joe Gibbs Racing, Stewart-Haas Racing, and Gaunt Brothers Racing. He’s never made the playoffs, but Marks says Suarez has a chip on his shoulder and is hungry to prove to everyone in the sport he can succeed.

“He’s very focused,” says Marks. “He’s got laser focus on this season. He’s not thinking about very much else; he’s not spending his time doing much else besides preparing for his debut in the 99 car. I’m really happy with where he’s at, and I feel very lucky to have him because I know he’s got the talent to do the job.

With the competition side in capable hands, Marks and company can focus on getting the business off the ground. That includes structuring their marketing and digital platforms.

Suarez has “a second chance, and is very motivated to make the most of it,” according to Marks. Russell LaBounty/Motorsport Images

Late last week, Trackhouse welcomed Armando Christian Perez, better known as Grammy Award winner Pitbull, as a co-owner. Perez is another individual who believes in what Trackhouse wants to accomplish on the track and in the community.

In Marks’s view, many celebrity partnerships in sports are about the cache of the name, or simply an indulgence for a star who is excited about watching the event. What is going to be different here, according to Marks, is that Perez will be out front of the brand, and a strategic partner in promoting the mission.

“It’s a fit that I don’t think could have possibly been any better,” Marks says of the relationship.

Sponsorship partners for the team haven’t been announced, and there is some available space on the car. However, Marks says it will not affect the commitment made for the season’s competition level. Marks is also willing to take some financial risk because he is very bullish on the sport’s future, which starts with the Next Gen car coming in 2022.

For as much as he expects to be competitive this season, there is also long-term planning and building going on at Trackhouse, and it keeps Marks plenty busy. There might be phone calls at 10 p.m. on a Saturday and working on a Sunday. It means looking at opportunities and activation for partners and other ways to work in the entertainment industry. Marks praises his front office for believing in what the organization is doing and their passion for the vision.

Eventually, Marks wants Trackhouse to be a fully autonomous team that operates as an independent entity. Part of that means getting to a position where the racing operation will look different than any NASCAR team operation ever has before. To do that, Trackhouse will have to establish itself as a team and nail down its business processes.

“There is a lot of money that has been invested in the infrastructure of this sport over the last 30 years, so why on earth would you build a fab shop right now?” Marks asks. “There are a lot of people that are sitting on assets right now that are looking for ways to share overhead and share costs, and I think what’s important for us is to make sure we’re being very intelligent with our capital allocation.

“Like I said, looking at the long view, this new car represents the opportunity for teams to be very competitive on their own without having to work at 150,000 square foot shops with 30-person strong engineering teams. My long-term goal with this team is for it to exist in a culturally relevant market with a public-facing element. If that means we’re in downtown Nashville, if it means we’re in downtown Charlotte, I want this race team to be an attraction for people and to be an asset to the community and market.”

NASCAR pushing Next Gen to next season was a blessing in disguise for Trackhouse. It gives the team one year to get their feet on the ground, build the company and its culture, build their platforms, develop the pit crew, and so forth. It gives Suarez and Mack a year to get familiar with each other, learn and put together a real competition plan for ’22.

All of that, along with the Childress partnership, should mean Marks doesn’t have to make a significant investment for the future, such as cars, that will obsolete at the end of the year while still having a notable debut season.

“I’m not going to sit here and say we’re going to make the playoffs and win races, but I certainly think we’re going to be a factor. We’ll be talked about because I think we’ll have some really great weeks.” 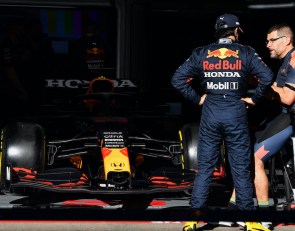