The most iconic cars in Mazda’s private collection will have a new member joining its ranks as the chassis that scored the brand’s biggest North American race win is headed for its Californian headquarters.

The No. 55 Mazda RT24-P that carried Harry Tincknell, Jonathan Bomarito, and Ryan Hunter-Reay to victory in November’s Mobil 1 Twelve Hours of Sebring, is set for a place beneath Mazda’s corporate base where it will hold a place of honor alongside the most important IMSA GTU, GTO, GTP, and Group C cars the company has preserved.

“There are some significant cars underneath Mazda’s design center,” Mazda Motorsports boss Nelson Cosgrove told RACER. “There’s a 787, but it’s not the right 787, there’s 767s, there’s old IMSA cars, and there’s a whole bunch of stuff. So this car will go in there and be within its family.”

Cosgrove instructed Mazda’s WeatherTech SportsCar Championship team to leave the Sebring winner untouched after the brand scored its most significant prototype win since the Mazda 787B captured victory at the 1991 24 Hours of Le Mans.

“It is, arguably, the second most important race we’ve won as a company,” he said. “It’ll be the 30-year anniversary of the Le Mans win in 2021, but, this has got to be the second most important win. It’s the 12 Hours of Sebring, man; it’s a big deal. And I’ve made the call, and we have some people that are in favor and some people that are not, but it’s been preserved as it came off the track.

“So in three or four years, when we all get sick of looking at this stuff, we can clean it, but we can never put it back to the way it is right now. So, it’s got confetti and dirt and tire marks and everything all over it – it is exactly as it came off the racetrack. We can always go clean it and rewrap it, but we can’t put it back to the way it is now. So, we’re going to leave it, let people enjoy it, and if we get tired of looking at it dirty, we’ll clean it.”

Mazda is among the most active manufacturers when it comes to entering its classic race cars in vintage events, which means the Multimatic-built chassis, and its AER-built four-cylinder turbo engine, will likely be seen and heard again in the coming years. And as Cosgrove shares, the retiring No. 55 RT24-P has two important areas of provenance to offer.

“So over the years in DPi, we’ve had a number of cars and spares made, and there was a replenishment plan for cars in the program for the older items that was planned in from the beginning,” he said. “So, there are tubs in our system that were purchased at the start the season we’d intended to rotate in, and our Sebring winner was one of them. So we ended up winning with engine 001 and chassis 001, and so it’s fitting, right, that this first car and engine are headed into the collection.” 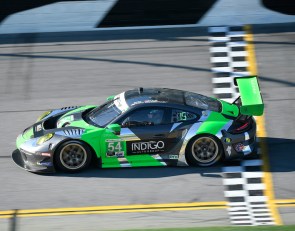 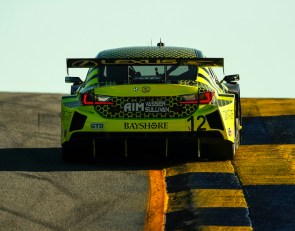