OPINION: F1 drivers need to recognize the racing world beyond the GP paddock

OPINION: F1 drivers need to recognize the racing world beyond the GP paddock

With the announcement of Yuki Tsunoda’s promotion to Formula 1 with AlphaTauri in 2021, there are now only two unconfirmed seats on the grid for next season, and one of those is going to Lewis Hamilton.

The other appears to be a straight choice between Alex Albon and Sergio Perez – regardless of how well Nico Hulkenberg performed as a stand-in this season – so somebody is going to be left disappointed. And as always, that includes fans who are either delighted to see certain drivers getting a seat, or raging that another has missed out, sometimes both at the same time.

If you ask me, that’s exactly the way it should be in Formula 1.

I’m not saying it wouldn’t be great to have more seats available, more teams developing talent and giving us more people to root for, more storylines and more action. But it shouldn’t be so that there is complete indifference about who is and isn’t on the grid each year. They should be heading off to race something else exciting if they don’t stay in F1.

It’s part of the drama, part of the intrigue and part of the jeopardy that makes sport so compelling. Knowing a driver might not keep their seat adds an edge to their performances, and for them, makes the successes so much sweeter when they secure their future after having been under that pressure.

Yes, it’ll be a big loss of Perez isn’t racing next season, but then we were saying the same about Sebastian Vettel when he was without a drive following Ferrari’s decision to sign Carlos Sainz. Doors closed at McLaren, which took Daniel Ricciardo, and Renault, which signed Fernando Alonso, leaving Racing Point as Vettel’s best option.

The change that ultimately cost Perez his seat ultimately means a one-time race winner has been replaced by a world champion – hardly a weakening of the quality on offer. And it’s clear that Perez has been the stronger driver out of the two at Racing Point this season – and stronger than Vettel, for that matter – but the team likely wouldn’t exist anymore without Lawrence Stroll’s investment (or Dmitry Mazepin as the other serious bidder), so it’s better to have one seat taken and one available for a Vettel or Perez than hundreds of people without jobs and neither cockpit around anymore.

Speaking of Mazepin, it’s a similar story at Haas. Guenther Steiner lists one of the biggest achievements of the team this year as simple survival amid the COVID-19 pandemic, so the need to turn to drivers with significant funding was dramatically increased. Mazepin provides that, and keeps the team involved in the sport so that it can provide another seat for another driver.

Mick Schumacher is the beneficiary as he appears to be part of a much bigger tie-up with Ferrari – following the arrival of Simone Resta in an as-yet-undefined position – but ignoring the famous surname, he is deserving of his chance simply based on the fact he won this year’s Formula 2 championship, beating Tsunoda in the process.

Some open-mindedness on the part of Kevin Magnussen has been rewarded with a ticket into IMSA’s DPi class with Ganassi next year. Hone/Motorsport Images

Daniil Kvyat was rightly getting some love over the past couple of days as he departs AlphaTauri, but that team exists predominantly to give young talents an opportunity, and Tsunoda is the sort of exciting prospect who needs to be placed in there. Red Bull had learned all it was ever going to about Kvyat, and that’s not to say he isn’t a very good racing driver who can get the maximum out of a car, but he hasn’t been standing out as a future world champion candidate.

With Tsunoda available and doing the job in F2 with an impressive rookie season, is it better to learn nothing new about Kvyat and simply enjoy another strong midfield campaign, or promote Tsunoda?

I’m sure few people need convincing about that decision, but they might be a little unhappier about some of the others. Perez has been a very good driver doing a very good job for some time, but he hasn’t exuded the impression that he would give Max Verstappen a run for his money in the same team.

So should Red Bull really turn its back on the ethos it has with its young driver program to replace Albon with Perez? Or should it be looking to give Albon even longer until another younger talent forces its hand – either Gasly continuing his fine form, or even Tsunoda himself?

Unless Perez (or Nico Hulkenberg for that matter) can properly challenge Verstappen and therefore the Mercedes drivers too, then there’s little to be gained from such a move, especially for fans. We’d of course see a stronger Red Bull overall, but based on this season that would just mean Perez is more likely to pick up regular podiums when there’s an issue for one of the top three, reducing the opportunities for other teams to grab the odd trophy.

In Formula 1, we like to claim that you get the best 20 drivers in the world racing the fastest cars, but obviously that’s not entirely true. You still get 20 very talented racing drivers but they’re not the definitive top 20 by any stretch, even if you could somehow accurately rank them.

That’s how it has always been, and the travesty of losing a driver that is maybe within that top 20 but not within the top five is often overblown in my opinion.

If it does highlight a problem, I’d argue it’s with the wider motorsport sphere. Too many drivers are utterly fixated on being in F1 and shun everything else as a result. Perez is a prime example, saying he will take a sabbatical and try and come back in 2022.

IndyCar, the WEC, Formula E, NASCAR – these are all high-performance categories where drivers who have been scrapping with very little realistic hope of winning could set their sights on a championship. Kevin Magnussen heading to IMSA with Chip Ganassi Racing is exactly what I mean, because he wants that feeling of winning again, and he’s definitely going to get that chance.

But Magnussen’s also going to see just how high the level of driver talent is in IMSA’s DPi class, as he will in IndyCar if he gets a shot there. And the more drivers that follow his lead when doors close for them on the F1 grid, the more that broader quality will be highlighted. In turn, that would increase the chances of F1 teams seriously looking at the best prospects in other categories, rather than just the ones coming through the junior ranks.

When an F1 driver loses their seat, they don’t stop being a racing driver, and I want to see them committing elsewhere rather than hanging around in reserve roles in the hope of another chance to jump in a midfield car. Who knows, it might even make them a better racer… 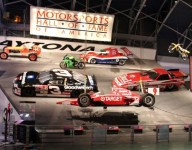 The Motorsports Hall of Fame of America’s signature exhibit, the 40-foot tall “Sweep of Speed,” underwent an exciting transformation (…)