RM: There are three types of fences approved by the FIA: concrete, Armco and SAFER barriers. Tire barriers are also used at many road and street circuits. Armco has been reinforced over the years but the fence at Bahrain failed, plain and simple, so I would imagine IndyCar will give the fencing at Road America, Mid-Ohio, Laguna Seca and Portland a thorough examination to make sure it’s sturdy.

Q: The Halo clearly proved its worth beyond doubt. In one close-up view you could see where it impacted the barrier. Without it, we’d have another horror like Helmut Koenig at the Glen in 1974. We know the Aeroscreen is more aimed toward preventing debris striking the driver, but after last Sunday do we foresee some sort of combo of the two concepts in IndyCar?

RM: I don’t know, but the fence failed and really gave the Halo an unnecessary test. I do think IndyCar is happy with how the Aeroscreen responded in a few crashes in 2020, but they’ll always be looking at ways to improve it.

Q: After last weekend’s crash, I doubt anyone will still pine for the days before the Halo in F1. I hope it also ends complaining about the IndyCar aeroscreen. While racing can never be without risk, our driver’s safety is the priority, not the look of the car. Obviously, Grosjean didn’t plan on this. They say in Hollywood that there is no such thing as bad publicity. Not many in the U.S. outside of F1 fans had ever heard of him before yesterday. His crash was even covered by NPR. In your opinion, does an event like Sunday’s near-tragedy improve his chances for attracting sponsorship in IndyCar next season?

RM: I don’t know that sponsors would come flocking to a driver that escapes a fiery crash as much as they might back a driver that returns after bad injuries. The mainstream media only cares about motorsports when there’s a sensational crash or a fatality and six months later it’s forgotten, so I doubt if it’s going to do much for Grosjean’s profile in terms of raising money.

Grosjean’s Halo was MVP in Bahrain last weekend, but there are plenty of questions about the barrier. Andy Hone/Motorsport Images

Q: Grosjean’s crash and the ball of fire was reminiscent of the big crashes and fireballs we used to see at the Indy 500, before the advent of methanol. I haven’t seen a fireball like that in an IndyCar for a long time. Forgive an ignorant question, but I’m not a regular F1 watcher. Why the huge fireball? F1 is not still using gasoline, is it? An oil fire wouldn’t create a fireball like that. A lot of the coverage is correctly pointing out that the Halo saved his life but some attention should be given to the fireball and the combustible nature of their fuel. Glad Grosjean came out OK.

RM: F1 cars use gasoline similar to what you get from the pump, but here’s what F1 managing director Ross Brawn guessed: “I suspect that (fire) came from a ruptured connection… I honestly don’t know. I think we need to look at it. Surprisingly, it looked a big fire, but those cars are carrying 100 kilos (26 gallons) of fuel at that stage, and I think if 100 kilos went up, it would be a massive fire. For me that was a fire of a few kilos of fuel, not 100 kilos.”

Q: As has been discussed in previous Mailbags, many F1 drivers are anxious about ovals. There is no way any crash at a current IndyCar or NASCAR oval could be as bad as Grosjean’s at an FIA track, correct?

RM: Oh, hell yes. Grosjean wasn’t even going that fast compared to most oval-track accidents, and his G load was nothing compared to the Indy crash that sidelined Oliver Askew. The guardrail splitting and subsequent fire made it a whole lot worse than it should have been.

Q: I was surprised to see they are still using Armco barriers in F1. Thought it was banned years ago after a driver was decapitated at Watkins Glen. Also, do they not use fuel cells in F1 and what kind of fuel? Haven’t seen fire like that in Indy cars since probably 1964 at Indianapolis.

RM: Armco barriers are one of the three types of fences approved globally by the FIA but obviously this particular model failed. And F1 has fuel cells.

Q: How can it be in this day in time, that one of the newer race tracks in F1 still has Armco barrier installed? Merle Bettenhausen lost his right arm in a crash at Michigan in 1972 due to the Armco barrier, and A.J. damn near lost his at Michigan in 1981. For the most part, Armco barrier has been replaced by IndyCar and NASCAR with the SAFER Barrier. Although the driver survived, that is a testament to the Halo and the rock-solid tub that F1 mandates in its rules. I know that Formula 1 is not IndyCar, but just maybe this will wake up Formula 1 to take a long look at the tracks that they participate on. Sebastien Bourdais had his wreck coming out of Turn 2 at Indy in 2017, and it can certainly be said that car construction and the SAFER Barrier saved his life.

RM: If you look at the Armco at a place like Watkins Glen it’s built up and designed to deflect the car – not eat one like what we saw last Sunday. The old Armco fences were plenty dangerous, as you pointed out, but the FIA has new standards for them and, despite what the designer at Bahrain claims, this one did not do its job. 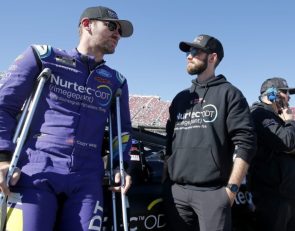 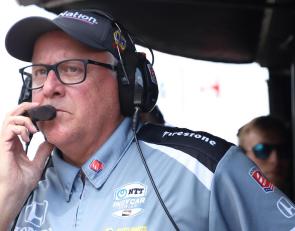