A decade almost to the very  day… On October  18, 2010 at Toyota Speedway in Irwindale, California – now commonly known as the House of Drift – Vaughn Gittin wheeled his 1,200-horspower, asphalt-wrinkling Monster Energy Ford Mustang to his first Formula Drift championship.

Hyped as the Title Fight, Gittin thrilled the sold-out crowd of 10,000 SoCal motorheads by whipping his black and green Mustang around the venue’s 12-degree banking, the growling American muscle car oftentimes mere inches from the venue’s unforgiving concrete walls to win the prestigious international title.

“This is just simply unreal,” Gittin announced to this writer that chilly evening on the outskirts of Los Angeles. “To do this has been a total dream of mine.”

Fast-forward 10 years and to last Saturday evening in Irwindale, California where, yet again, Gittin clinched the Formula D championship in his 2020 Monster Energy Ford Mustang RTR. “This is just simply unbelievable,” declared the man who likes to refer to himself as a “Professional Fun-Haver” booth in and out of the car. ”This has been a dream of mine for the past seven years. It is a true accomplishment for my team and a testament to their commitment to the sport. I could not dreamed a better Formula Drift season for our team and to have earned these results throughout the year have had me elated with gratefulness.”

The first Yankee to win a Formula D1 Grand Prix – he pulled that off at the 2005 USA vs. Japan showdown – Gittin is the undisputed master of the sport in this nation.

Q: I was fortunate enough to watch you win the Formula Drift championship at this very same venue a decade ago. This season it all almost seems like it was meant to be for you and your race effort. Thoughts?

VAUGHN GITTIN: I mean, it was. Everything that happens is, right? It’s rad. Ten years ago.. all the vibes were right, all the dreams were coming true… This year is very similar to all that for me. I’m in such a good place, and I’m so much more experienced now. I just know so many things now that I didn’t know then and it has been a cool year with a lot of really cool moments. Irwindale was definitely a weekend full of reflection.

Q: Last evening, I went back and watched what was the live webcast from Irwindale. The two announcers, Jarod DeAnda and Ryan Sage, went on and on about how you were a much different and much more mature driver in 2020. They mentioned that you have made it a point all season long to not get too caught up in worrying about your other competitors. Can you talk about that?

I kind of got to a point where I said, ‘What the hell? Why does it matter?’ This is what I do, and I know when I’m next to a car and six inches from it and it zigs, I know when to zag. When it brakes, I know how to slow down with it. This is what I do. So why I am I so worried and spending this energy getting all worked up with what the other guys are doing? I’m just going to just enter the turn behind them jamming on their door and then I’m going to let me just flow with it and trust myself. That was the biggest thing. I’ve been worrying too much.

This is even something that I carry into my normal life. I just kind of worry about **** that I shouldn’t worry about instead of just trusting that the universe and my being has everything in my best interest and it’s all going to work out. I just need to let it instead of getting of the way of it. I think it all just goes back to that I found a new level of fun. I kind of lifted this big weight off of my shoulders by not worrying so much about things I couldn’t control and just focusing on the things that I could. All that really reinvigorated me. I never really lost my spark – I love this sport. That’s why I do it. It’s just like every year finding new challenges and continuing to push myself.

This year was one of those years where I unlocked a new level in myself and that translated into sport, as well. I turned 40 this year. There’s been a lot of new personal learnings. And as far as my competition, look, this sport is just absurd in its progression year after year. I mean we are throwing around 1200 horsepower, 3000 pound cars with 315 millimeter-wide tires on them. These things are absolutely crazy. So the competition was stiff this year. That’s just drifting. Every year is harder than the year before, without any question.

Q: Correct me if I have it wrong, but it certainly appeared that a hell of a lot went right for you and the entire team this entire summer.

VG: Yeah, a lot of it is also team and preparation. That’s all been a huge part of our success. Again, 1200 horsepower with a Ford Performance Roush-Yates-built naturally-aspirated motor that my team has adapted nitrous to. We’ve got upwards of 300 horsepower being popped in the car depending upon where my throttle position is at. To keep that kind of vehicle together through eight rounds… and we saw it in the final round at Irwindale. Chris Forsberg popped his motor. Frederic Aasbo popped two motors. He was in championship contention. So was Forsberg. Ryan Tuerck popped his motor! This all happened at the last round, you know? We were best prepared and had the reliability. A lot of that had to do with my team’s experience and their preparation and, frankly, their passion.

For me, that’s the biggest thing, man. These recent reflection moments for me have been so full of gratitude for the guys that I have surrounding me. I mean they are just unbelievable humans that have unbelievable skill sets. At the end of the day, man, I get to jump in that car eight rounds and be the lucky bastard that gets to wheel it. The rest of the days of the year those dudes are working on the car so that I can wheel it and we can have this conversation.

It’s just special, you know? In a year like this, achieving the results that we have, we’ve done some great stuff this year and it’s just a true testament that you can create your own reality. No matter what is going on anywhere else, if you keep your focus and your goals and it’s all truly what you want, you will achieve it n matter what is going on. For me, you hear people say stuff like this a lot, you know, “Dream big! You can do anything!” I’m straight proof that that shit is real and this is proof of that.

VG: You know, I tell my team this all the time: I am a professional fun-haver. What that means to me is that I always find the fun, no matter what. Yeah, there are other things I might rather be doing, but I find the fun in them. I feel that it’s our job as humans to have fun and live a fun-filled life. I tell my team all of the time, ‘You guys are trusting me to lead you and you guys believe in what I believe in which is why you are here. It’s also very important to me for all of you to have fun and be fulfilled with what you are doing.’ If that’s not happening, money can’t replace that. Let’s find the fun, you know? I just think that mindset is so powerful and I’ve got a team of people now that believe and live that mindset and we’re starting to really see some great benefits all across the board. It’s just so rad.

Q: Thanksgiving is upon us. What will you have going the next couple of months?

VG: We built an electronic Mustang and I’ve been racing Ultra4, so there has not been too much of an off-season for us. We’ve got plans. I’m going to chill. I’ve basically got Thanksgiving and I’m going to Jamaica for two weeks with the family, and then I’m back on the grind starting the first of the year. We’ll be testing new equipment and getting after it. Things are good, and things are also so good at Ford. I get along with everybody there, but I’m just so excited with Jim Farley now being CEO at Ford. I’m just so excited about Jim and his vision; he’s just a car guy and he’s going to take it to the next level, and I’m just so excited.

You know another thing that is just so rad? We finished first and second in the championship. I won the championship and my teammate in the same car, Chelsea DeNofa, got second. This is his best finish ever. To see him progress into the driver that we knew he was has just been incredible. This whole season has just been really incredible all the way around. 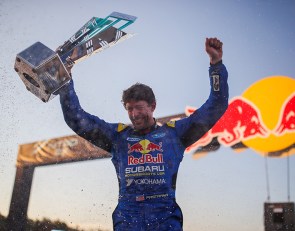 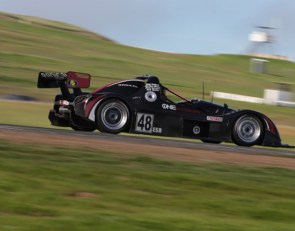 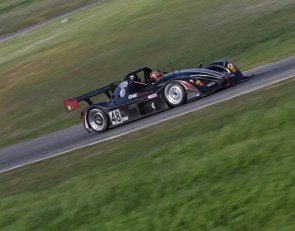