No less than 53 years after its formation in 1967, Formula Ford 1600 will reach the climax of its season this weekend with the 20th Walter Hayes Trophy event at Silverstone. As always a stellar field has been assembled, which, remarkably given the backdrop of the COVID-19 global pandemic, has once again topped triple figures. In all, 103 drivers will assemble at the home of the British Formula 1 Grand Prix in honor of one the founding fathers of the unparalleled open-wheel training ground category, with Bryce Aron and Jackson Lee seeking to add their name to the victory roster alongside fellow Team USA Scholarship winners Conor Daly (2008), Connor De Phillippi (2009) and Tristan Nunez (2012).

All of them, including Aron and Lee, have spent the past three days testing at the 1.604-mile Silverstone National circuit which never fails to provide some spectacular racing action.

Sunshine on a wet track is the closest thing the Team USA drivers have seen to dry running. Image by Jordan Aron

“‘Is it dry yet?’ was the phrase that summed up our three days of testing,” said Aron. “Over the past few days Jackson and I have been running at a very cold and wet Silverstone. Even when there was no rain the track oddly remained very wet meaning that a true dry session never occurred. Despite the interesting conditions I have absolutely enjoyed every minute of the experience. In my mind nothing is better than pushing a Formula Ford to the limit, especially at a soaked Silverstone circuit. The entry for the weekend looks absolutely brilliant with a lot of talented drivers. Tomorrow looks like it will be very wet and I’m extremely excited for the start of the racing.”

Both Aron and Lee have been turning competitive lap times in the tricky conditions.

“I am well prepared for this weekend’s events,” echoed Lee. “Low Dempsey Racing has really been amazing at helping me learn the new track. While Silverstone looks pretty simple, especially coming from a very busy Brands Hatch, it is not easy.

“I have definitely become much more comfortable in wet conditions now that I have raced here in England. I’m much more confident and I can push the car consistently – just one of the many ways this experience has improved me as a driver.

The entry list has been split into four eight-lap Heat races, with grid positions established during quick-fire 10-minute qualifying sessions tomorrow morning, Saturday, October 1, starting at 9:00 a.m. local time (5 a.m. ET). Aron has been drawn in Heat Three, which is set to start at 1:10 p.m., and Lee directly afterward in Heat Four. The familiar knock-out format will continue with a pair of 12-lap Semi Final races starting at 11:10 a.m. (3:10 a.m. ET) on Sunday morning. The 15-lap Grand Final is set for 3:10 p.m. Live timing, which will include commentary led by regular British Touring Car Championship announcer David Addison, can be found at https://www.tsl-timing.com/event/204456.

“My hat is off to Formula Ford guru James Beckett and the HSCC for assembling such a tremendous field in these challenging times,” said Team USA Scholarship founder and noted auto racing writer/broadcaster Jeremy Shaw. “The Walter Hayes Trophy is always one of the highlights of the racing season and I have no doubt this 20th edition will fully live up to expectations.” 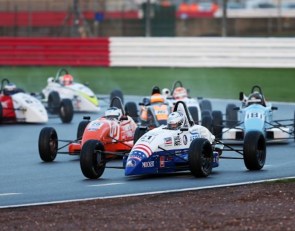