The 2020 Lucas Oil Off Road Racing Series may have been condensed, but by halfway it was pretty clear who the title contenders would be. And while there were a few repeats – one in dominating fashion, two in an agonizingly close fights to the finish this past weekend at Glen Helen Raceway – there were several first-time champions as well.

One fight to the finish was in Pro 2, where every point counted, between defending champion Jerett Brooks and Doug Mittag, returning to the class after a couple years focusing on Pro 4. Both campaigned the opener in older Unlimited trucks, where Brooks took two wins. But in the second weekend, a tripleheader at Lucas Oil Speedway in Wheatland, Mo., both showed up with new (Brooks) or refreshed (Mittag) trucks with the Midwest-spec 410 engine.

There Mittag began a run of consistent podium finishes that saw him going into the finale with a two-point lead.

“In Arizona, he was so consistent,” said Brooks of his title rival. “We were either winning or finishing fifth and we were two points down coming into Glen Helen. We put our old setup from the 2019 truck and we were consistent, qualified first, and led by two points coming into Friday’s race. Those qualifying points played a big part.

“On Friday, we were right behind Doug, and I had to go for it. I made the move where he least expected it. I got the halfway points, and won the race.

“We had a six-place invert for Saturday. [Mittag] started right next to me, got up to second behind Trevor Leighton. All we had to do was finish two positions behind Doug. Leighton spun out, Mittag went to the bottom and drove me to the wall. And we said, ‘Just let him go.’ He got by, so did [Ryan] Beat. We just cruised around because we knew what we had to do. It was cool to come out with a new truck and win another championship.”

Not only did Brooks take home another Pro 2 championship, but Jerett Brooks Racing was named Team of the Year and crew chief Tanner Stephens was named mechanic of the year. Brooks runs a tight ship, with he, Stephens and Nick Tenbruin doing most of the heavy lifting, and they’re all 30 or under, so it’s a young team.

“That was super cool for Tanner,” Brooks exclaimed. “He’s kind of the under-rated guy, so it was cool to have him get some recognition for all the stuff he’s done. Last year he gave me the full setup on my truck, and that made me so fast. Winning Team of the Year is the icing on top. It was cool because we have a really small team, and we’re all like brothers.”

Brock Heger has been pursuing the Pro Lite title for years, first under Jeremy McGrath’s tent, and now as Brock Heger Racing. He’s come close to getting it several times, and has two Production 1000 UTV title to his name, but he Pro Lite championship has eluded him until this year. In 2020, he had five wins, including doubles at the Lucas Oil Speedway and Wild Horse Pass Motorsports Park tripleheaders, and came into the finale not needing much to take the title.

“I’ve been trying to do this for so long, and finally got it done,” Heger said. “I think the difference was we took a different approach. We were always chasing it – it seemed like the first round of the season we always had bad luck, and I had to chase the whole year. So we said, ‘Let’s just get through the first two rounds at Glen Helen,’ and I walked away with a sixth and a second. We got through there, and then we just wanted to win. We won five races and were pretty much on the podium the rest of the time. I had two DNFs, and to have those and a sixth place and still win it, is crazy.

“Next year we’re going to work on those DNFs. I couldn’t be more excited going into next year, having the No. 1 plate. Hopefully we can hang onto it.”

In Pro Buggy, it was all Eliott Watson. The defending champion came into the final race with an amazing seven wins in a row and having never finished off the podium all season, to claim his second consecutive title. Not only that, he had the most fast laps and was named Driver of the Year.

Myles Cheek had an epic year to take the Production 1000 UTV title away from two-time champ Brock Heger. While Cheek and Heger had some epic battles, Cheek came out on top more often than not. Claiming seven wins and never finishing off the podium, while Heger finished outside the top three on a couple of occasions, gave him the 2020 championship.

In Turbo UTV, it was another fight to the final lap. Ronnie Anderson looked like he might steal the title from “Queen of UTV” Corry Weller, coming into the finale with a seven-point lead after dominating at Wild Horse Pass. But a win for Weller on Friday while Anderson had a bad finish meant that finishing second to Anderson on Saturday was enough to take the title, her third straight. 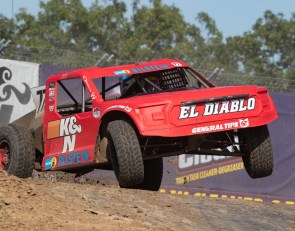