Daniel Ricciardo rates his first podium for Renault alongside his first ever in Formula 1, as his third place at the Eifel Grand Prix ensures Cyril Abiteboul will get a tattoo of his choice.

The Renault managing director agreed to get a tattoo if Ricciardo scored a podium this season, with the Australian allowed to pick the design. Three fourth-place finishes for Ricciardo had increased the interest in the bet and at the Nurburgring Ricciardo duly delivered a strong third place after Valtteri Bottas retired with a power unit issue.

“To be honest, it feels like the first podium all over again,” Ricciardo said. “The feeling I have now, it’s like that really happy shock. I can’t really remember the race, where it really happened for us. I had the start, it was critical to get (Alex) Albon and (Charles) Leclerc. Leclerc held on for a few laps and defended well, but then I got him.

“That set us up, then Valtteri had a problem so that gave us the track position. But we knew (Lando) Norris and (Sergio) Perez were going very well on the soft (tire). The safety car restart at the end, I was very close to getting Max (Verstappen), but us tussling meant that Perez got very close and I thought that he was going to get me into Turn 4.

“So it was pretty stressful, but it’s been two and a half years since I’ve had a podium and (it’s) really nice. When we signed on the dotted line, this Renault contract, it was to be up here and get a podium by year two. We achieved that. Next year is another story — I am moving on but I think this really does still cap a pretty cool story we’ve had and shared for these two years. The good news is it’s not over yet.”

A first trip to the podium for @danielricciardo since his win in Monaco 2018 🍾#EifelGP 🇩🇪 #F1 pic.twitter.com/Gq5LDfUCZe

Abiteboul doesn’t have any tattoos yet, but Ricciardo — who has multiple — insists he is going to ensure the bet is honored, something his boss himself insisted he would do on Sunday night.

“It is real — it is going to happen. We will have to do some thinking now. Probably something to do with me, but I think with a German flavor. This is obviously the place we did it, so a little tip of the hat to something traditional in Germany as well.

“I know a few artists in London, and obviously we both spend some time in London with our schedules with the team just north of London, so I might have to get someone to do a call in and we’ll set up a little house studio for him, I reckon.” 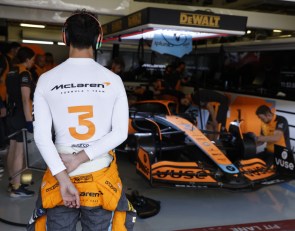