Trans Am Series presented by Pirelli wrapped up the Heacock Classic Gold Cup on Sunday with the final race of its doubleheader with all five classes taking the green in a single race at Virginia International Raceway. The 41-car field generated action from the drop of the flag all the way to the checkered flag, with three safety car periods setting up dramatic restarts.

It was a case of the more, the merrier for Ernie Francis Jr., who held off Chris Dyson on a late restart and scored his 46th career Trans Am Series presented by Pirelli victory by a scant 0.911-seconds.

The 22-year-old six-time Trans Am champion is credited with leading all the way in the No. 98 One South Wealth Advisors Ford Mustang. But it wasn’t as easy at that looks as Dyson made numerous attempts to nose ahead in the No. 20 Plaid Ford Mustang. The win marked a record-breaking moment for Francis Jr. as he passed Scott Pruett for fourth on the all-time list with his 23rd overall TA victory.

“I can’t say enough about my team,” said Francis “We were worried about a doubleheader weekend and how that would affect the car. Everything went smooth and they were on top of it. The car was on rails the entire weekend. It is great to be able to maximize on points this weekend with two wins. We got good momentum going towards the rest of the season so we can take home the championship. I can’t wait to get to the next one!”

Road America winner Dyson was disappointed after coming so close to the victory. 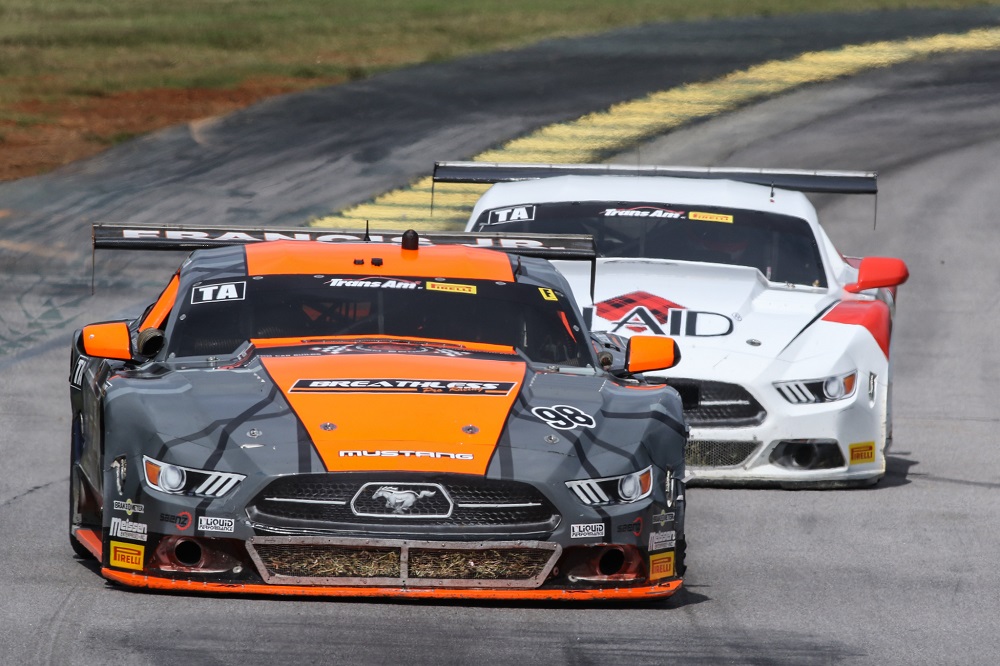 “It never feels good to come in second,” Dyson said. “We are here to win, but we had a great battle the entire way with Ernie . VIR is a tough place to pass, but that is how it is. We got held up a bit and I had more work to do than I thought. We had enough to rein Ernie in, but not enough to get by.”

Amy Ruman completed the podium, placing third in the No. 23 McNichols Company Corvette. Running a strong third in the early laps, she had memorable battles along the way with Tomy Drissi in the No. 8 and late substitute Paul Menard, who drove the No. 2 Weaver Racing Dodge Challenge that had been taken to second by Boris Said on Saturday.

“It feels great to get that last step of the podium especially after a tough-fought race,” Ruman said. “Toward the end, our rear tires were giving out and I didn’t have enough to keep pace. We lucked into third at the end, but that’s just how racing goes. I had a great start and hoped to keep that position but after I slid back a little I continued to fight. We had a good third place car and I am happy with a podium.”

Drissi spun in the final turn with a cut tire on the No. 8 Lucas Oil Chevrolet Camaro shortly before the final caution, and lost a lap in the pits. He finished sixth in the class, one position ahead of Menard, who dropped out with four laps remaining.

Looking for his seventh consecutive crown, Francis Jr. now unofficially leads Drissi by 37 points, with Dyson another 11 points in arrears.

TA2 Powered by AEM point leader Mike Skeen came from last to first to win his fourth race of the season. Parking his No. 77 Liqui Moly Camaro after struggling to sixth on Saturday, Skeen borrowed Bob Lima’s No. 63 Camaro for the race.

Saturday winner Tyler Kicera pulled away at the start, dominating the race in the No. 4 Carbotech Brakes Ford Mustang, while Skeen battled into podium contention. Lined up third on a restart with four laps remaining, Skeen quickly passed Cameron Lawrence in the No. 8 3-Dimensional Services Mustang and then Kicera. 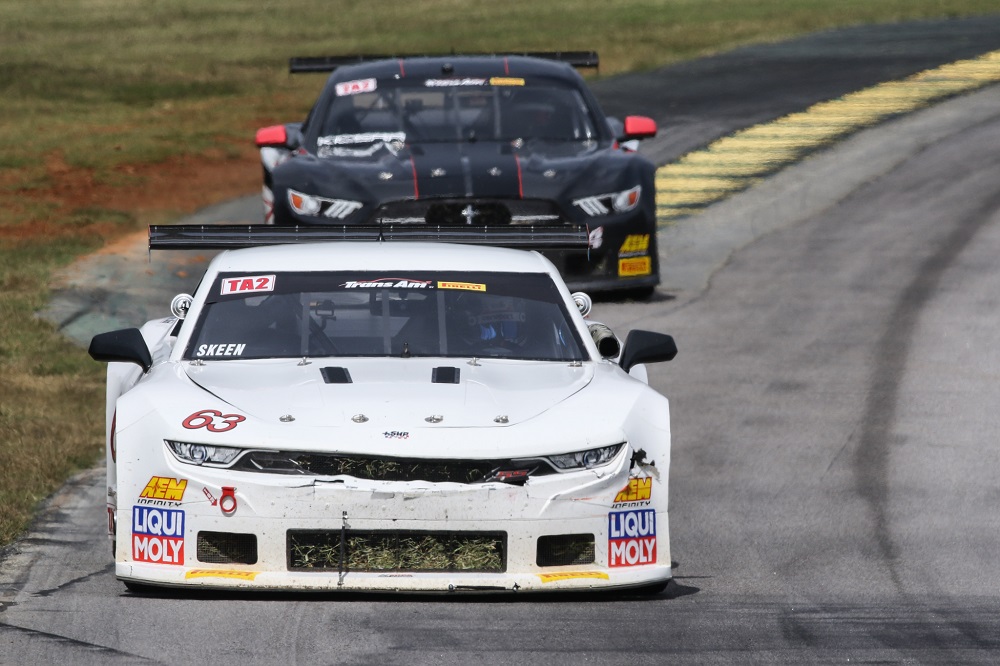 Skeen took the checkered flag by 0.248s ahead of Kicera, with Lawrence a close third. Keith Prociuk ran a very competitive race in the No. 9 HP Tuners/Mike Cope Mustang, while Doug Peterson finished fifth in the No. 87 3-Dimensional Services Group Mustang.

“It just comes down to the Stevens-Miller Racing guys giving me an awesome car and a big shout-out to Bob Lima for letting us use his car,” Skeen said. “I have never driven this particular car before but they set it up great. Tyler was checked out and there was no way we would have been able to catch him had it not been for that last yellow. On the restart, we came down with the accordion effect with the pack. It all fell into place. Very happy to have taken over the lead and very happy to know he didn’t know I was in the lead because he certainly had the pace to get by us. It has been a pleasure to race here at home and in front of friends and family.”

The last-to-first charge earned Skeen the Cool Shirts Cool Move of the Race Award, while he increased his lead to 42 points over Merrill for the season championship.

Kicera admitted that Skeen’s change of cars took him by surprise following the late restart.

“I thought I had a very good restart — I went at the green and went to the outside of some GT cars,” Kicera said. “To be honest, his number threw me off so I didn’t know it was Mike getting past me. I wasn’t pushing that hard because I saw Cameron behind me so I just kept maintaining. My dad came over the radio on the last lap saying, ‘Go get ’em’ and I didn’t know what he meant. I realized what was going on so I started pushing on the last lap. Maybe one more lap and I would have been able to catch him. It is disappointing given how dominant we were all weekend.”

After coming up short on Saturday, Erich Joiner ran a dominant race to take his third XGT victory in the No. 10 Championship Coffees and Tool Porsche 911 GT3 R. Point leader Ken Thwaits took second in the No. 5 Franklin Road Apparel Audi R8 LMS Ultra, and unofficially leads by 41 points. 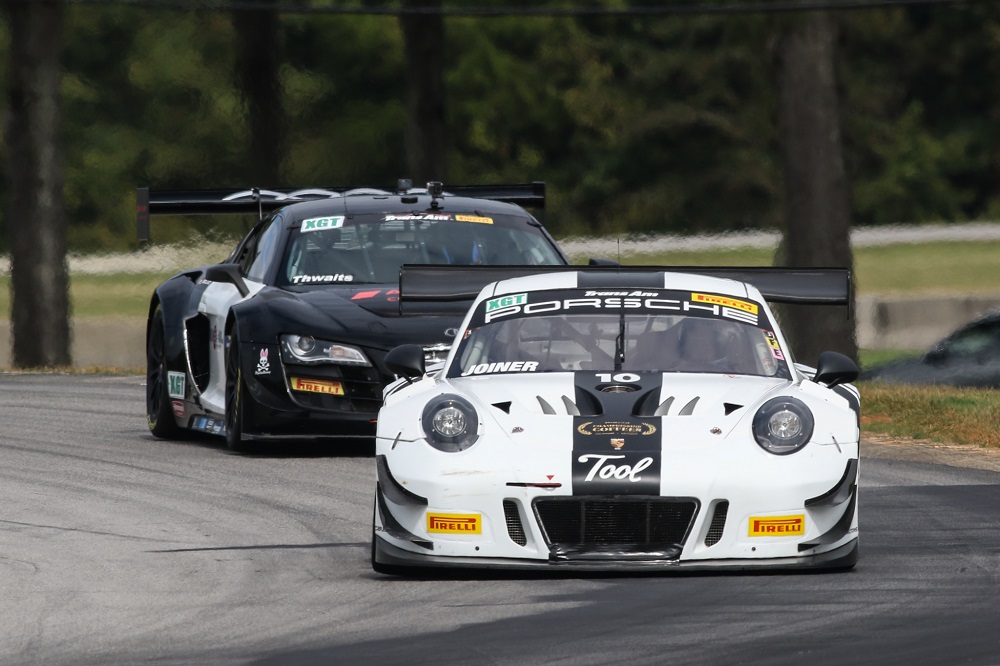 Joiner was up to the challenge of a “crazy” XGT race.

“Today’s race was crazy,” Joiner said. “The mix of all the cars made for some interesting and fun racing. A big thank you to my crew for putting my car back together. They did a phenomenal job. It was the first time I have raced with TA2 and there was a ton of rubbing wheel to wheel, which put me in an uncomfortable position. My fastest lap time was faster than the TA2 pole time but they were in a different race, so I knew I had to focus on keeping my car clean to make it to the end.”

After finishing second three times, Adrian Wlostowski scored his first career SGT triumph in the No. 96 F.A.S.T. Auto Ford Mustang. He led most of the race, although he had to repass Lou Gigliotti midway through the event to maintain his advantage. 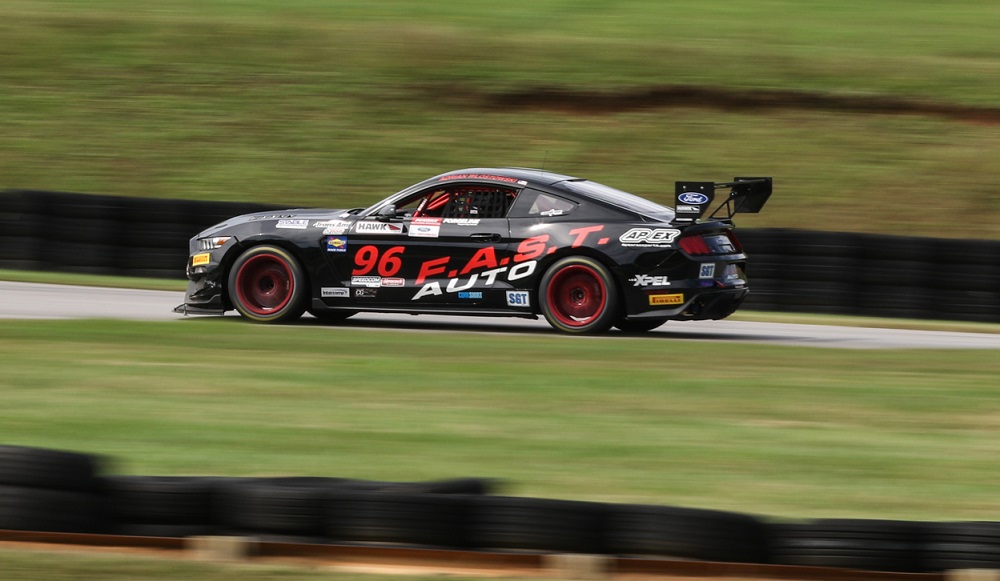 “I want to thank everyone on my team,” said the New York City driver. “They put in all the hard work to help me get to the top step of the podium today. We had a crazy race — we didn’t give up an inch. I knew our car struggled at certain sections of the track so I stayed aggressive where I knew where the car was good. It is a blessing to get my first Trans Am win and I am excited to get to COTA.”

Mark Brummond placed second in the No. 24 Garage Door Doctor BMW E92 M3, although he was passed by Francis shortly before the final caution to put a lap behind Wlostowski.

Gigliotti was running third in the No. 28 G2 Performance Corvette with eight laps remaining when he spun in Turn 1, also eliminating Saturday winner Lee Saunders, who was making a bid for a podium position in the No. 84 Landsearch LLC Dodge Viper. Saunders saw his point advantage trimmed to 26 points over Wlostowski.

In GT, Steven Davison scored his second victory of the season in the No. 22 Davinci Plastic Surgery Aston Martin Vantage, beating Saturday winner Billy Griffin in the No. 14 Griffin Auto Care Mustang. Point leader and two-time winner Tim Horrell packed up the No. 45 Breathless Racing Porsche GT4 Clubsport after retiring with mechanical issues in the Saturday event. Horrell now leads Davison by 34 points. 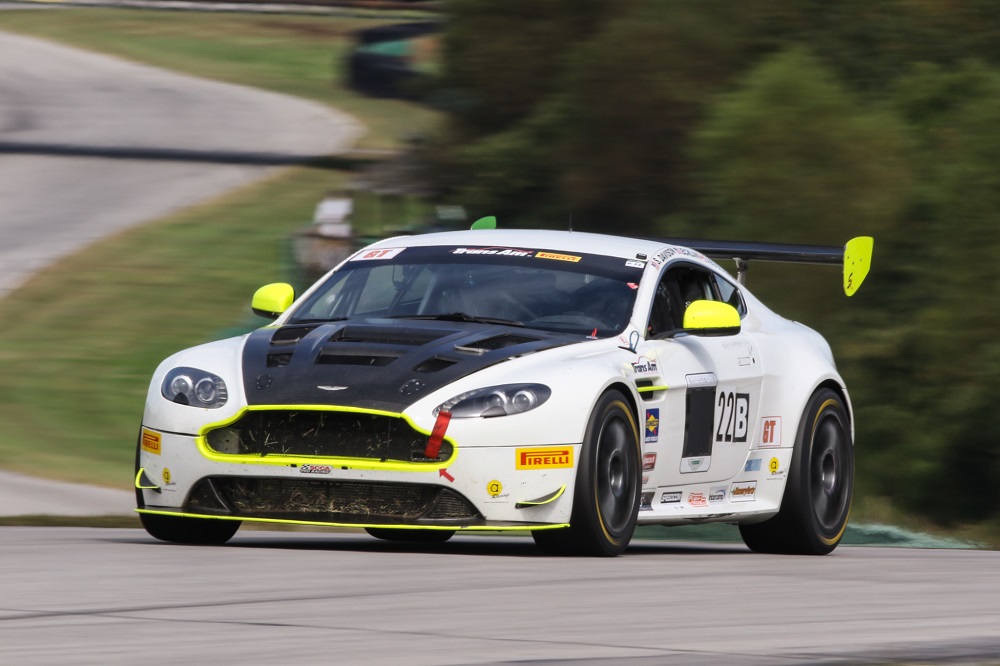 The race had three full-course cautions. The first waved on lap 2 to retrieve the stopped No. 7 Silver Hare Racing Camaro of Rafa Matos, who stopped in Turn 5. On lap 17, Aaron Pierce spun in Turn 5 and was collected by another car that was able to continue. The final caution, on lap 22, was for the Gigliotti-Saunders incident.

With the cancellation of the Lime Rock Park event scheduled for Oct. 16-17, the next action for the Trans Am Series presented by Pirelli will be at Austin’s Circuit of The Americas on Nov. 7-8.