NHRA announced today the remainder of its NHRA Mello Yello Drag Racing Series calendar, which will feature six more national events to complete the 2020 season. The traditional “Countdown” format to decide the series champions has been dropped for this year.

“We are grateful to the loyal NHRA fans who have stuck with us during these trying times,” said NHRA President Glen Cromwell. “NHRA plans to hold these next six national events to conclude the 2020 season. Thank you to our fans, racers, and partners for your continued support and cooperation.”

Dates for the remaining NHRA Mello Yello Drag Racing Series are as follows:

Due to the pandemic and scheduling conflicts, the three below listed national events have been removed from the 2020 schedule:

NHRA and its partner tracks originally planned to reschedule three national events but due to location and traditional climates, the below events (with their original dates) have been canceled: 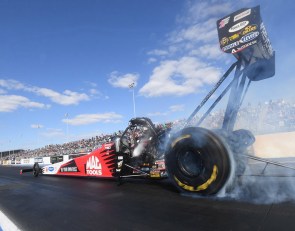 With a dramatic pass off the final corner in Saturday’s O’Reilly Auto Parts 300 at Texas Motor Speedway, Harrison Burton stole the (…)

If this is the last weekend in Cameron Beaubier’s MotoAmerica career then he seems determined to make it one he won’t soon forget. (…)

Anything can happen during the last 100 laps of the NTT IndyCar season, and, for the three drivers who are fighting to earn the final (…)

Tires the struggle in qualifying for standout rookie McLaughlin

The lone practice session on the streets of St. Petersburg were trending in the right direction for the newest NTT IndyCar Series (…)