Harvick surges to victory at The Brickyard

Harvick surges to victory at The Brickyard

Kevin Harvick has been one of the dominant drivers since NASCAR returned from its COVID-19 hiatus, and that continued Sunday at Indianapolis.

For the second time in three races, Harvick drove to victory lane after running away from the field on the final restart with two laps to go. With a push from Stewart-Haas Racing teammate Cole Custer, Harvick cleared Matt Kenseth going into Turn 1 and scored his second consecutive win – third overall – at The Brickyard.

Harvick led a race-high 68 laps. He took the lead for the final time when Denny Hamlin, who was out front, blew a right-front tire going into Turn 1 with seven laps to go. Hamlin’s accident set up the sprint to the finish.

“I’m just really proud of all these guys and everybody at SHR,” said Harvick. “I’ve just got to thank everybody from Busch Light. Our Ford Mustang was fast today. Mobil 1, Hunt Brothers Pizza, Jimmy John’s, everybody at Haas Automation for everything that they do for our car to be able to put it in victory lane is just a big effort right now to get the cars to the racetrack.

“Denny had his issues there, and we were able to capitalize and get a great push from Cole there at the end and bring it home.”

It was a long day @KevinHarvick, let us give you a lift to Victory Podium. #Brickyard400 | @BigMachine pic.twitter.com/9uZppVaDkq

Unfortunately for Hamlin, he was the fifth driver who suffered a blown tire during the 160-lap race. Hamlin, Erik Jones, and Alex Bowman had hard hits into the outside wall from their blown tires, while Ryan Newman also earned damage from a tire, and William Byron lost a left front while running second past the race’s halfway mark.

A dream run in the #Brickyard400 ends in a hard crash for @dennyhamlin.

He was able to climb from his car under his own power. pic.twitter.com/VhCyxsQsWB

Six drivers had early exits from the race following a pile-up on pit road under the lap 14 competition caution. Among those included were Justin Allgaier, who was filling in for Jimmie Johnson, and Martin Truex Jr. Allgaier finished 37th and Truex 38th.

Harvick continues to lead the point standings and is tied for the most wins this season with Hamlin. Indianapolis is his 53rd career win in the NASCAR Cup Series. 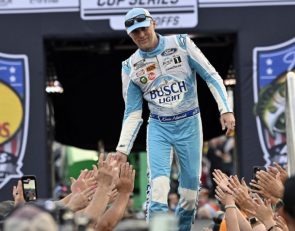