Blaney’s charge to the front comes a little too late

Blaney’s charge to the front comes a little too late

Ryan Blaney felt he and Martin Truex Jr. were “pretty even” toward the end of the Blue-Emu 500, but Blaney had too much ground to make up.

“I would have loved to line up beside him on the (last) restart … and see what we could have done,” said Blaney after finishing second. “But we’ll never know. I thought we had a really good car. I was never really close enough to see on equally worn tires, to see what we had for him.”

The last run to the finish at Martinsville Speedway was 98 laps, following the restart from a caution on Lap 397. Blaney’s charge didn’t come until the final 50 laps when he broke into the top five. However, he was over four seconds behind Truex at the finish line.

Although he started from the pole, it was a long night for Blaney and the No. 12 Team Penske team. Blaney didn’t lead until Lap 272 and led a mere 34 laps on the night. He did not score stage points in Stage 1 and had fallen to 23rd in the running order by Lap 45.

Blaney was one lap down when NASCAR threw a competition caution on Lap 60. Receiving the free pass when the caution came out on Lap 114, he finished second in Stage 2. From there, Blaney’s race had an upward trend.

“It was a very interesting race,” Blaney said. “We started off really bad. I mean, we went from starting on the pole to being a lap down in 60 laps. That’s kind of tough to do. We found a way to do that. We dug ourselves a hole early.

“After the first pit stop, we got our car a lot better. I think just the green racetrack didn’t really go well with what we had or something. We really wore our tires out. I had to run the top a lot, was getting passed. I don’t think that helped. After that, I felt more competitive. We got the Lucky Dog there right before the first stage end. After that, we drove all the way up to second. We had a great long-run car. That was great.

“To be able to get the lead there at the start of the third stage, kind of biding our time, taking care of our stuff. Caution came out. We got a penalty on pit road (crew member over the wall too soon) that set us all the way back again with not a lot of laps to go.

“The last restart we started ninth, (Truex) just got away from me. I couldn’t run him down. By the time I got to second, he was gone. My stuff was a little worn out, having to pass a lot of cars. Overall really proud of the effort from the 12 group, from where we started to where we ended. I can always be happier, winning the race, but we made huge gains today. Atlanta was the same way. We didn’t start off great, but we got a lot better very quickly. That just shows what this team can do. I’m really proud of everybody on this crew.”

While he is the only Penske driver still without a win this season, Blaney is confident that breakthrough is “very close” to coming for he and crew chief Todd Gordon.

“I thought it was going to be tonight,” said Blaney. “You keep bringing speed like this every week, eventually you’re going to find a little bit more and be able to win the race. We’ve just got to keep doing what we’ve been doing. I think it’s going to come soon.” 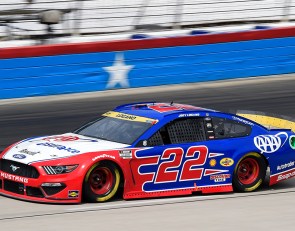 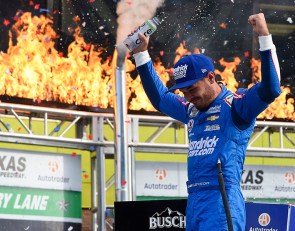