NASCAR released the next portion of its revised 2020 schedule Thursday afternoon, which includes another mid-week race and multiple doubleheaders.

Bristol Motor Speedway will host the NASCAR Xfinity and Cup Series at the end of May. All three national series will then move to Atlanta Motor Speedway at the beginning of June, which was the first track that has its races postponed due to COVID-19.

Martinsville, Homestead and Talladega are the other three tracks that had dates announced. All races will continue to be run without fans in attendance.

The Bristol dates, with day, date, series, distance, TV and time, are as follows:

Atlanta will host races as follows:

“Our goal at Atlanta Motor Speedway is to provide fans with a weekend of fun and great memories, so it’s tremendously disappointing that the circumstances surrounding the pandemic will prevent us from hosting spectators,” said track executive vice president and general manager Brandon Hutchison. “When fans can join us again for a NASCAR weekend, we’ll be extremely motivated to provide every customer with an unforgettable experience. In the meantime, I hope the Folds of Honor QuikTrip 500 broadcast on FOX brings people joy and excitement during a challenging time.”

Martinsville will host the Cup Series on Wednesday, June 10. It will be a 263-mile race broadcast on FS1 at 7 p.m. ET.

“This will be a historic night for NASCAR and Martinsville Speedway as we turn on the lights to host a NASCAR Cup Series for the first time in our 73-year history,” said Martinsville President Clay Campbell. “As a sport, we have worked closely with federal, state, local, and public health officials to ensure the safety of the competitors, staff, and our local community. While we will miss hosting our loyal Martinsville race fans for the Blue-Emu Maximum Pain Relief 500, we hope to welcome fans back for the penultimate races of the NASCAR season this fall.”

Homestead-Miami Speedway will host all three series, as follows.

Talladega will host races as follows:

“As we prepare for our return to racing at Darlington Raceway on Sunday, the industry has been diligent in building the return-to-racing schedule,” said Steve O’Donnell, NASCAR executive vice president, and chief racing development officer. “We are eager to expand our schedule while continuing to work closely with the local governments in each of the areas we will visit. We thank the many government officials for their guidance, as we share the same goal in our return — the safety for our competitors and the communities in which we race.”

NASCAR also announced the postponement of races at Kansas Speedway (May 30-31), Michigan International Speedway (June 5-7), the Xfinity Series at Mid-Ohio (May 30), and the Gander Truck Series at Texas (June 5). The Xfinity Series race at Iowa Speedway, which was scheduled for June 13, has been realigned to Homestead on Sunday, June 14.

All NASCAR national series races and the Whelen Modified event at Iowa have been canceled for 2020. 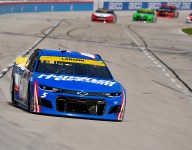