Chase Briscoe has been looking forward to another shot at conquering Auto Club Speedway for a whole year. The Stewart-Haas Racing finally gets that shot this Saturday in the Production Alliance Group 300 NASCAR Xfinity Series race (4 p.m. ET, FS1) in a Ford Mustang carrying those same colors. And it comes fresh off a dominating win last weekend in Las Vegas, making Briscoe 1-for-2 in a season where he’s looking for a bucketful of victories.

Briscoe earned a fifth-place finish in his first run at the Fontana, California speedway last year, but he found it to have similar characteristics to places he’d previously found success.

“It’s one of those tracks that is really fun to go to as a driver,” said Briscoe. “It’s so slick and worn out. It’s not the same shape or even the size of Homestead, but it races a lot like Homestead, where you kind of start off the wall and, as the run progresses, you get up to the wall.

“Now that I’ve gotten a lot more experience in the Xfinity Series, I’m looking forward to going back and having a shot at a good run with our Production Alliance Group Ford Mustang. Last year, we were in the top five and had good speed at the end of the race but, honestly, it took me the whole race to figure out how to run the track, so I’m looking forward to going back there this year with a baseline of where to start.”

Auto Club is a rough two-mile oval. Cameras often catch cars being tossed around on the backstretch as drivers try to find the best way to get over numerous bumps. The old, worn-out surface also has seams that can make for a slippery ride through the corners.

All of this doesn’t intimidate Briscoe; on the contrary, it’s why he’s so looking forward to the 300 miles ahead.

In his first visit to ACS, Briscoe found his style well-suited to the track’s unique characteristics. Image by Logan Whitton/LAT

“I feel like any race we got to the seams really affect us, but it seems like Fontana is the worst,” said Briscoe. “You throw that into how rough that place is and how worn out it is, and it really makes it challenging. But I feel like this is the kind of track that plays into a dirt guy’s background — and I love racing dirt — because it changes so much throughout the race. You have to save your tires because it’s slick and worn out, and you want to be there with a shot at the end.

“For a two-mile racetrack, it requires the most throttle control we have to use out of anywhere we go. Hopefully, we go out there, and it’s 100 degrees and really slick.”

Xfinity Series teams will have eight sets of tires to use throughout the weekend.

Dirt tracks are where Briscoe’s racing career began before he switched to stock cars. The first time Briscoe got behind the wheel, 2001, he won his heat and feature race that same weekend. He also has the honor of being the one to break Jeff Gordon’s record as the youngest driver to win a 410 sprint car race.

In stock cars, Briscoe won the 2016 ARCA Series championship, claimed Rookie of the Year in the Truck Series in ’17 and the same honor in the Xfinity Series last year.

Fontana will be Briscoe’s 53rd career start and the next opportunity to add another win to his growing resume.

“I feel like (winning) is something we can do all year long, and I’m thankful to be the one with the opportunity to drive the No. 98 and work with (crew chief) Richard Boswell and his team,” said Briscoe. “It’s even more fun to be able to start off the West Coast swing with a win to where we can go out to Fontana … and just have fun.” 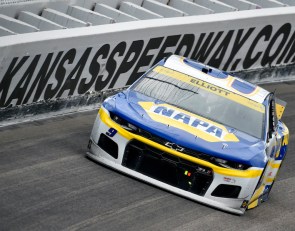