The No. 31 Action Express crew put a Cadillac DPi at the top of the times for the first time this week, Filipe Albuquerque setting a 1m34.914s under the floodlights in night practice at Daytona.

Action Express’ sole DPi led a Cadillac 1-2-3. Behind the No. 10 Wayne Taylor Racing example finished up second, while the No. 5 Mustang Sampling JDC entry took third.

Only five DPis turned competitive laps in the session. The No. 7 Acura spent almost the entire session in the garage being worked on after Ricky Taylor’s off in qualifying, before heading out for a couple of shakedown runs. The two Mazdas meanwhile, spent time being looked at by mechanics too.

In LMP2, the No. 52 PR1 ORECA, which will start the race from class pole on Saturday, topped the time. Gabriel Aubry’s 1m37.084s was three and a half tenths up on the No. 81 DragonSpeed 07 Gibson that took second.

In GTLM, it was Porsche once again setting the best time, the new 911 RSR 19 proving untouchable so far this week. The No. 24 BMW though, split up the two all-conquering Porsches on this occasion, slotting in second with a 1m43.611s from Augusto Farfus. The No. 911 Porsche finished the night third, with the No. 3 Corvette fourth.

In GTD, Wright Motorsports topped the times with its No. 16 Porsche, leading a Porsche 1-1, the No. 9 pole-winning Pfaff 911 coming in second.

Best of the rest was the No. 48 Paul Miller Racing Lamborghini Huracan, which came a tenth shy of the best time in the class.

Further down the order, AIM Vasser Sullivan’s No. 14 Lexus RC F GT3 made a welcome return to track action in the session, after its engine change ahead of qualifying. It managed plenty of laps with its new power plant and ended up 11th in class, with a 1m46.363s best time from Jack Hawksworth.

Elsewhere, the Black Swan Racing team has sourced a spare chassis to ensure it makes the start on Saturday. Its original 911 RSR GT3 was damaged beyond repair in its incident during opening practice, leaving the team scrambling for a solution. The new car is in the early stages of being prepped for the race. 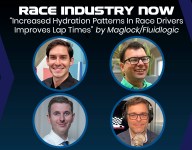