If Saturday night’s 34th annual Chili Bowl is anything like Friday night’s final preliminary feature, you’ll want to be in front of a television that has MAVTV. In the best race of the week, where slide jobs and passing happened in every corner for 30 laps, Tanner Thorson triumphed over Ryan Bernal by a car length as they both locked into the big show with some amazing driving.

Starting fifth in the Hayward Motorsports Spike/SR-11, Thorson traded the lead with Chris Windom, Tucker Klaasmeyer and Bernal before grabbing the top spot with seven laps left and hanging on for the victory.

“I raced a lot with Ryan on the West Coast and you don’t get many guys who will race you clean like all those guys did tonight — it was a helluva race,” said the former USAC midget champion from Minden, Nev. “I knew the top would come in and when it did this car was on rails. It’s a badass car, this team is badass and I excited for tomorrow.”

Bernal, a veteran of winged sprint cars on the West Coast who has been running USAC the past couple seasons, came from seventh to take second place in the Matt Wood Racing Spike/Stanton but it’s how he got there that was so surprising. Running sixth on Lap 21, the native of Hollister, Calif. dived low when the leaders all checked up and suddenly found himself in front in Turn 1. He stayed on the bottom and almost pulled off the win until Thorson got past on the cushion.

Windom started on the pole, fell all the way back to seventh and then stormed up to finish third in the Tucker-Boat Spike/Toyota.

“It’s pretty disappointing — I made a couple mistakes that probably cost me second place so now we’ll have to come through the B Main,” said the former USAC sprint and Silver Crown champion. “Everyone was throwing haymakers and it was fun but I wish we could have capitalized on this car.”

Klaasmeter started second, led a few laps and had to settle for fourth while NASCAR Xfinity regular Justin Allgaier put on the drive of the night and charged from 16th to fifth. 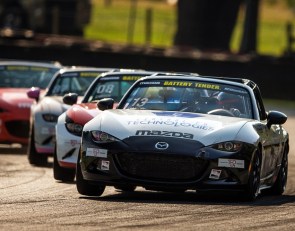