James Mangold’s movie Ford v Ferrari has been nominated for Best Picture by the Academy of Motion Picture Arts and Sciences, which is believed to be a first for a motor racing-themed film.

Depicting the legendary fight at the 1966 24 Hours of Le Mans, where the Ford Motor Company spent a small fortune to develop a car that was capable of dethroning Enzo Ferrari’s creations, the movie earned acclaim from most formal reviews, and was subject to criticism for inaccuracies and fictionalized segments from experts on the rich era of international sports car competition.

Ford v Ferrari will face stiff opposition at the Oscars as it competes against The Irishman, JoJo Rabbit, Joker, Little Women, Marriage Story, 1917, Once Upon a Time…In Hollywood, and Parasite in the Best Picture Category.

Thanks to the Academy for their recognition of our film FORD v FERRARI. Producers Jenno, Peter & I are thrilled to be nominated among such moving & unique films & grateful to our brilliant team of artists who brought our characters & their adventures on & off the track, to life.

Although Ford vs Ferrari, which features Matt Damon as Carroll Shelby and Christian Bale as Ken Miles, is thought to be the first racing-related movie to be considered for Best Picture, its predecessors, including John Frankenheimer’s lavish 1966 film Grand Prix, have been nominated in other categories by AMPAS, with Grand Prix earning three Oscars for sound editing, sound mixing, and film editing. 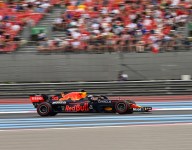 Road to Indy 16hr ago ET