Fellows to be awarded Order of Canada

Fellows to be awarded Order of Canada

The bestowment of the Order of Canada carries immense honor and significance, which makes it a perfect fit for racing legend Ron Fellows. The Ontario native was selected among a group of 120 distinguished Canadians to receive the appointment from Julie Payette, the Governor General of Canada, later this year, which marks a welcome decision to include one of the country’s most prolific drivers.

The final stage of Fellows’ long career is where the 60-year-old’s popularity grew the most on a domestic and international level, due in part to the back-to-back class wins for Corvette Racing at the 24 Hours of Le Mans, and his leadership role within the factory program as both a high-profile driver and chassis development expert.

Fellows made an early impact in Trans Am with a Roush Mustang. Image by Marshall Pruett

Renowned among General Motors fans, Fellows made his first impact years earlier in the SCCA Trans Am series driving a Ford Mustang for Jack Roush, where the blue AER-sponsored machine became a terror with its driver, sporting a maple leaf design on his helmet, working from behind the steering wheel.

Whether it was representing the Bowtie or the Blue Oval, Fellows made his presence felt, which kept his services in high demand as NASCAR teams sought his road racing skills for nearly 20 years – until Fellows was in his early 50s.

Retirement followed, but he wasn’t finished with the sport. As part of an ownership group, Fellows purchased Mosport, the beloved Canadian road course, which was renamed Canadian Tire Motorsports Park, and has undergone long-awaited facility upgrades under his care.

Along with the other recipients of the Order of Canada, Fellows will receive a lapel pin which, according to Governor General’s office, is a “six-point white enamel insignia they wear [that] symbolizes our northern heritage and our diversity, because no two snowflakes are alike.” 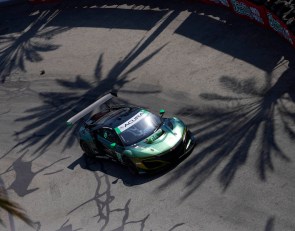