Arrow McLaren SP has cast its lot with the pairing of Patricio O’Ward and Oliver Askew, and despite their lack of age and experience, the move towards extreme youth isn’t the big gamble it might have been a few years ago.

McLaren CEO Zak Brown spoke of wanting to combine a future ace with a proven veteran in 2020, and those plans not only changed; they’ve been tossed aside in favor of the youngest duo in the NTT IndyCar Series. We’ve heard rumblings for a few weeks regarding the original plan coming together with former Arrow SPM driver James Hinchliffe leading the team with Askew serving as his understudy, but with the recent availability of O’Ward, the formula shifted to a twosome who have an average age of 21.

It’s a bold strategy, no doubt, but far from crazy.

“Santino Ferrucci’s a perfect example,” says his former Dale Coyne Racing engineer Michael Cannon. “You’ve got a 20-year-old kid who joined Dale’s team that had been racing since he was six, grew up in the school of hard knocks, and racing is the only thing kids like Santino know.

“By 20 or 21, they’re consummate professionals. It look guys a lot longer a generation ago, because so few were on that truly professional path at such a young age like Santino was, or Colton Herta, or Pato have been. By the time they get to us in IndyCar, these kids are battle-hardened professionals. You aren’t scared the same way you would have been before about having rookies – good rookies – in your team.”

Cannon, who comes from decades of developing rookie open-wheel drivers in the junior formulas and IndyCar, achieved considerable success with Ferrucci on ovals, the one new form of racing for the Connecticut native to learn when he returned from the European open-wheel ladder system. Ed Jones, who spent his rookie season with Cannon at Coyne, also impressed on the ovals. Given the talent possessed by O’Ward and Askew, combined with their limited introduction to ovals while winning the 2018 and 2019 Indy Lights championships respectively, the twosome should have few glaring deficiencies to overcome next season.

“People marvel at how well [Ferrucci] did on the ovals, but there shouldn’t have been any surprises because he didn’t have any bad habits to break,” Cannon says. “He was a sponge. He tackled it so quickly. And with his generation of drivers, their brains process things so fast that the big new stuff that comes at them isn’t overwhelming.

“If you have someone who’s an accomplished road racer, they tend to adapt to ovals. We saw it with Nigel Mansell. Emerson Fittipaldi was the same way. There’s so many examples have shown this over the years, and these kids are proof of it once again. The feeder series, all the way down to karting, are producing all these incredible young drivers.”

A former junior open-wheel driver in his native Canada, Cannon gives credit to the educational systems that have erased vast portions of the rookie learning curves. The process that once demanded years of patience and understanding as young drivers explored the limits and made costly mistakes have, with the finer talents, been relegated to history.

Rookies like Ferrucci need a lot less time to adapt to IndyCar than their predecessors. Image by Levitt/LAT

“A couple things that have happened the last 10 or 20 years that started this phenomenon, like Jeremy Shaw finding talent through his Team USA Scholarship program,” Cannon says. “The Road To Indy series Mazda put together has been churning these high-caliber drivers out for a while now, and when you look at a kid like Oliver Askew, who had to win at every level to continue their careers, there’s no two ways about it.

“They’re a different breed than the guys who got to IndyCar and then had to learn the right way to do things by doing the wrong things, more often than not. What we get now, with the better kids coming up, is most of that learning curve is handled before they get to IndyCar. Once they’re here, it’s about picking up the little stuff, not as much the big stuff, and it shows in how quickly they become competitive.”

Factor in the volume of sim racing IndyCar’s next-generation drivers amass during the offseason and between rounds, and stories like Colton Herta’s three-pole, two-win debut in 2019 with Harding Steinbrenner Racing might have company as the O’Wards and Askews hit the series at full speed.

“The upside is their eyes are wide open, and they’re going to rely on each other,” says Chip Ganassi Racing managing director Mike Hull, whose driver Felix Rosenqvist won Rookie of the Year. “Hopefully, unselfishly, they help each other, because they’ll have a lot to prove to each other and the team. And they’ll look to the team for guidance, and that’s a good thing.

“And both have at least basic IndyCar experience. They know how to prepare themselves more fully than true rookies to the series, because they first got chances to test IndyCars while in Indy Lights. That opportunity that’s given to Lights drivers cannot be underlined enough.

“I thought O’Ward’s IndyCar debut at Sonoma [in 2018], and Askew, in testing at Portland for us in August, were highly impressive. They understand fitness, teamwork, how important it is to keep the tires underneath them, and when to hold back on the race track. And they’ve both driven on all – or most all – of the tracks they’ll race on. The kind of things they’re having to learn by the time they get to us is miniscule in comparison to their counterparts in the past.”

Hull also believes the Arrow McLaren SP team will be ready to capitalize on the youth movement they’ve embraced.

“The team is young, it’s aggressive, working hard, has young management with a lot of experience, and has terrific owners,” he says. “It’s a perfect match for those two drivers. With the way their team is structured, with Sam Schmidt, and Ric Peterson, and a sponsor in Zak Brown and McLaren who understands the pitfalls and realities and where they’re going together, it looks like a good fit. I hope they’re patient with them, if they by chance happen to stumble, because they have big talent. They’ll be fun to watch.” 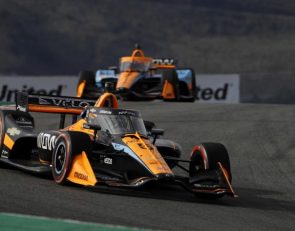