After their first morning behind the wheel of IndyCars equipped with the Red Bull Advanced Technologies-designed aeroscreen, Team Penske’s Will Power and Ganassi’s Scott Dixon both said they felt confident the new cockpit safety device will be ready to race as scheduled next season.

“You could race this weekend, no problem,” said Power. “You could do that. That wouldn’t be an issue. That shows what a good job they’ve done just bolting it straight on.”

“Totally agree,” echoed Dixon. “I think as we’ve been working on it today, there’s some configurations that you could adjust, and those might be personal things, as well, but I think it’s spot on. It’s good to go.”

Power and Dixon combined to complete more than 600 miles at Indianapolis Motor Speedway before taking a break, and were scheduled to return to their cars to make additional runs during the afternoon.

“Today has been pretty much seamless,” said Dixon. “We went through a bunch of configurations for cooling and where we can push the air to control the helmet, and how it feels, and how much pressure you have there. Ultimately it’s just very quiet. I can hear my radio for a change. Normally I can’t hear that. So that’s kind of nice.

“But there’s actually a lot less load on the helmet, too, so visually there’s been really no impairment. I think some of the areas with tear-offs and stuff and where they seam in the middle will be fixed kind of down the road, too, to make it even better.”

Power believes that the current version of the aeroscreen could be pressed into service immediately. Image by IndyCar

Power’s list of areas that need additional development was similarly short. “The tear-offs are obviously something they’re going to work on, how they fit, and glare on the inside with what paint you put on and such,” he said. “But the vision is fine. There’s no problem doing a stint with bugs and such that get on the screen.

“I’m so happy that we have it. It’s really a huge step in safety, and I think it’s the best of both worlds. You’ve got the halo and you’ve got a screen, so I think that you’ll see other open-wheel categories follow suit. When you’ve driven it for a day, you’re going to feel naked without it. If you took it off, you’d feel pretty naked because there’s not much protection there. So, very happy that we’re moving ahead with it.”

In addition to trying different configurations of winglets and fans to direct airflow around the driver, the session was also an opportunity for the drivers to experiment with more mundane practicalities like getting in and out of the cockpit.

“It’s something you’ll practice a lot,” said Power. “You think about how many times you get in and out, you’ll get good at it. I’d rather have it around my head than worry about if it’s a struggle to get out because maybe someone will be pulling you out.”

“They’ve had the frame, the piece that they’re already practicing on,” he said. “They’re also practicing, if you had to take the thing completely off, how quickly that could be done. It’s very quick at this point. We have some great tools to do it.

“At the end of the day, we’re really hoping that this creates [an environment where] you don’t have to extract anybody. It’s there to protect people. They’ll get better as they go. There’s even parts of it that they think it’s better than the current car to help extract [drivers], because you can lean on it. There’s eight inches in the front that they can lean on, and it gives them leverage.”

Getting in an out is s little trickier than with an open cockpit, but nothing that the drivers think can’t be addressed with some practice. Image by IndyCar

The Red Bull Advanced Technologies-designed screen builds upon the groundwork laid by the PPG-designed prototype that was tested early last year.

While the aeroscreen was under development, IndyCar introduced a temporary titanium deflector mounted ahead of the cockpit in May. The final version of the aeroscreen incorporates a polycarbonate laminated screen with an anti-reflective coating and a heating element to minimize fogging with a Halo-style titanium frame. It is designed to have load-bearing capability of 150 kilonewtons, which equates to around 33,750 pounds.

The next scheduled test will take place at Barber on Monday, when Simon Pagenaud and Ryan Hunter-Reay will take the wheel, followed by Richmond on October 15 with Dixon and Josef Newgarden, and Sebring on November 5 with James Hinchcliffe and Sebastien Bourdais. For Frye, those tests are the next steps toward what he believes will be an entirely new era in safety.

“We couldn’t be more proud of this,” Frye said. “This, to me, is a game-changer. This is big. The aero kit was obviously very cool. We got our identity back. We like the way it races, all that type of stuff, less downforce, more horsepower, that’s the direction, that’s all good. But I think this is something that will really change the complexion of the sport for a long time to come, so this is big.” 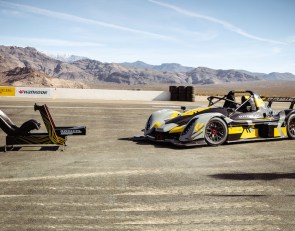