Josef Newgarden became a two-time IndyCar champion at WeatherTech Raceway Laguna Seca in a race that was controlled from start to finish by Colton Herta.

Newgarden came into the race with a 41-point lead, and right from the outset it was clear just how important that buffer would be. A day-long struggle with his rear tires meant that he never had the pace to challenge for the race win, and even the relatively kind Plan-B scenarios that kept his claim to the title safe as long as he hung around the top six started to look at risk of buckling under pressure from teammate Simon Pagenaud.

The signs that another championship was destined for Penske began to appear fairly early on when Alexander Rossi was beaten out of the pits by Newgarden after the first round of stops, and then never really had an opportunity to respond. Scott Dixon was eliminated from contention just after mid-distance when the bonus points that he required to keep his already-slim chances alive went elsewhere, but Pagenaud never gave Newgarden a chance to relax.

Newgarden’s rear tires required an especially delicate touch almost from the start, and without little hope of being able to push hard over a stint, his ability to influence the outcome was restricted mostly to not making mistakes and hoping Pagenaud didn’t start carving through the pack.

Pagenaud certainly gave his teammate reasons to be nervous. He’d muscled past Rossi after the first round of stops, causing Rossi to momentarily trip over the gravel, and then picked off Newgarden a couple of laps later.

He spent the next couple of stints hovering around third or fourth, gaining and losing places through the pit stops, but it was when he leapfrogged Dixon to claim second in the final round of stops that the radio chatter back to Newgarden’s car probably became a bit more urgent. Dixon got the place back almost immediately though, and then Power threw a cat among the pigeons by staying out two extra laps before his own final stop and popping out ahead of both of them in second.

Power set off in pursuit of Herta, while Pagenaud settled in for almost 30 laps of trying to pass Dixon, and with almost no push-to-pass left. His best opportunities came late when Dixon’s own supply of extra boost had been exhausted, but Dixon’s car can become supernaturally wide when he wants it to be, and unfortunately for Pagenaud, this was one of those days.

“I knew if I got Dixon I had a chance in the championship, because I really had a lot of pace in the car, but I was using up my tires,” said Pagenaud.

“He didn’t make it easy, that’s for sure. But we tried. He’s a racer, I’m a racer and that’s what we have to do . I think Josef was the best all season, he was the most consistent and he deserves it. I got the [Indy] 500 and I’m happy with that. I think this was my most complete season, so I’m proud. And very proud for Team Penske. We’ll see what we can do next year, but this one will be hard to top.”

Rossi, meanwhile, had gambled by starting on scuffed reds when both of his Penske rivals started on blacks, but discovered to his dismay that the reds weren’t performing as well as he’d been hoping.

“I think the blacks were much friendlier for us, which was unfortunately because we started on the used reds,” Rossi said. “It was a risk that didn’t pay off, unfortunately.

“At the end of the race when we knew that the championship was out of touch it became about trying to close down Simon, but for whatever reason we didn’t have the tire life we needed. I think we were one of the better cars on blacks. Our bed was made on the first stint, unfortunately. It was diabolical. It’s unfortunate that for the second year in a row we were in the position of having to roll the dice, but regardless I don’t think we had the car to win. We probably had the car for third, which wouldn’t have been enough anyway.

“[The strategy] was an educated risk. It wasn’t a shot in the dark. The conservative strategy would have been to match the cars around us and pick up spots through strategy or attrition or whatever. If you have the car, then any strategy can look pretty magical. But we just didn’t have it today.”

Herta was in control most of the day. Image courtesy of Harding Steinbrenner Racing

Herta led from the start, and for every lap outside of the pit stops, but his afternoon was no less straightforward than it had been for the contenders. Tire management was the obvious question; the high degradation rate at Laguna being amplified in his case by the fact that overworking his tires had been his undoing last time out in Portland. As it turned out, Portland had proven to be a valuable lesson that he leaned on this time around.

“We had a really good strategy,” he said. “We had to save a little fuel at the end and it hurt us a little, but we were really quick. Learning from Portland; we were really bad there [with tire management] so I was staying within the limits, not doing anything that hurt it, and that’s what we brought here.”

The win was Herta’s second of the season, but it wasn’t quite enough to wrest Rookie of the Year honors from Ganassi’s Felix Rosenqvist, who rebounded from the qualifying penalty that relegated him to 14th on the grid to put on a masterclass of overtaking that carried him up to fifth.

“It was an interesting race, because there was a lot of deg on the tires and we all knew that, so it was not just being aggressive all the time, it was about picking your moments,” said the Swede.

“You could feel every time you pushed through a corner properly — the next corner you were on ice, so it was tricky managing it. But the strategy was perfect, that safety car helped us a little bit for sure. It was a hell of a year. My crew has been flawless all year, and I think they deserve this sixth in the championship and rookie of the year.

“Yesterday was a tough day, and if I didn’t get angry I think there was something wrong with me. We all go 100 percent into this with full heart and when something like that happens — which I still think is a bad decision – it’s part of the show, I guess.”

The safety car in question was the only one of the race, and was prompted when Conor Daly caught the dirt and spun while trying to go inside teammate Marco Andretti at Turn 2.

The only other incident of any consequence came just after the restart when Santino Ferrucci made his first real mistake of the year and ran into Takuma Sato. He was formally deemed to have caused avoidable contact, but it was a moot point since by the time the decision came down, his car was already being pulled behind the wall with a broken control arm. He and Ed Jones, who dropped out with a mechanical problem, were the only two retirements. There could have been at least two more though when Sato, Zach Veach and Matheus Leist decided to see whether they could go three-wide through the Corkscrew. Spoiler alert — they couldn’t — but amazingly, the only harm done was Veach needing to take the Zanardi line before rejoining.

Outside of the championship battle — and Rosenqvist’s heroics — Ryan Hunter-Reay earns a salute after rallying to 10th after dropping to dead last when he stalled during his first stop, while Sebastien Bourdais rebounded from the neck problems that sidelined him from Friday’s warm-up session to finish eighth. 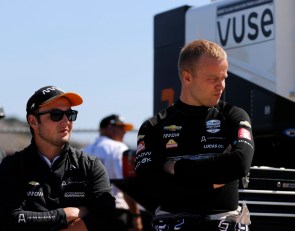