CRANDALL: Where dreams go to die – until next weekend

CRANDALL: Where dreams go to die – until next weekend

Clint Bowyer went from animatedly talking to whoever would listen early in the Las Vegas weekend, to trying to make a quick exit Sunday night.

“You guys good?” he asked the media bullpen as he turned to leave after offering 11 words about how the South Point 400 played out for he and his No. 14 Ford team. Bowyer had finished 25th in the opener of the Monster Energy NASCAR Cup Series Playoffs after starting from the pole for the first time in 12 years.

What had started as a promising night swiftly went sour. A tight battle with teammate Daniel Suarez at the green flag ended with Bowyer nipping past Suarez at the line to lead the first lap, but that was the highlight of his night. From there Bowyer began sliding backward, and was even lapped near the end of Stage 2.

In Bowyer’s defense, a driver wanting to make a quick exit after a rough night is not unusual. And Bowyer had also learned before the race that his grandmother just had passed away.

But Bowyer wasn’t the only playoff driver ready to put Las Vegas in the rearview mirror. Just as New England Patriots head coach Bill Belichick always turns to the next NFL game just moments after the last one finishes, drivers were already mentally moving onto Richmond before the sweat had dried from their foreheads.

Kevin Harvick and Brad Keselowski rounded out the podium, finishing second and third behind winner Martin Truex Jr. Harvick revealed that a litany of changes had been made by his team throughout the weekend to just give themselves a chance of being better than the 20th-place car Harvick thought he had.

Keselowski made something from nothing in Vegas. Image by Kinrade/LAT

Keselowski went from the outhouse to the penthouse; from sitting on pit road during the middle of the race with the hood up to stealing a top five. Nothing went right for his team for much of the day in Vegas, but preserving and minimizing bad days is a must in the postseason and that’s what this group did.

Chase Elliott, Ryan Blaney, and Alex Bowman finished fourth through sixth. They didn’t have flashy days, but were there when it mattered. William Byron overcame a lap 182 spin from a flat tire following contact with Blaney to finish seventh. Kyle Larson was eighth. Joey Logano rebounded from finding trouble when he suffered some damage after contact with Daniel Suarez to finish ninth.

Then there was Ryan Newman. No doubt, Newman and Roush Fenway Racing have a huge uphill battle when it comes to winning the championship, but do not assume it’s automatic that this team will be eliminated in the first round. If the regular season taught us anything, it’s that Newman can do exactly what he did in Vegas – get better as the race goes on, and collect some points at the end of the night when other drivers have beaten themselves.

Even a 13th-place finish for Aric Almirola was satisfying. Almirola said his team dug deep and scored points, keeping him in a position to fight for the next round. Denny Hamlin finished 15th but was still upbeat, knowing it was a rare off night for his team but that they will be fine in Richmond and Charlotte. Kyle Busch, well, by now everyone knows how he felt about his night, and Busch has playoff points to fall back on.

Erik Jones and Kurt Busch? Get a ladder and start climbing, because the hole has been dug one race in. Round one, race one was just the start, though. Next comes a short track (Richmond) followed by a road course (Charlotte).

Vegas was the perfect example of what the NASCAR playoffs are all about – only the strong will survive and advance. 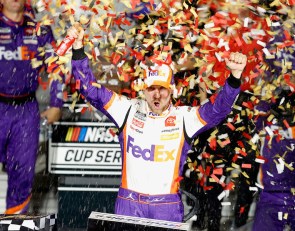 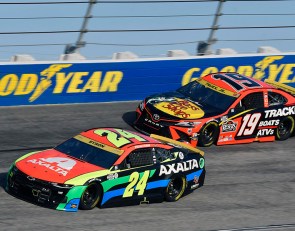