With the Trans Am Series presented by Pirelli TA2 season winding down, every lap matters, even in qualifying. The TA2 presented by AEM class drivers felt that urgency on Friday afternoon as all of the American muscle machines were flat out from the drop of the green flag.

By the time the checkered flew on the 20-minute session, the top five drivers were separated by just seven tenths of a second, with the front three rows claimed by a mix of TA2 class veterans and rookies.

The top five times were only separated by seven tenths of a second! #GoTransAm pic.twitter.com/JJ793gRh3L

Not only fighting against his competitors, Rafa Matos was also fighting off an illness, but the defending champion didn’t let that keep him down as he captured his fourth pole of the 2019 season. Driving the No. 88 3Dimensional Services Group Chevrolet Camaro, Matos edged TA2 points leader Marc Miller by seven hundredths of a second, notching a fast time of 1m51.197s on his third flying lap.

“I had a rough night trying to recover from this sickness,” Matos said. “We are doing everything we can to recover points from Marc (Miller). We are getting better every day. Every point counts. We need to get that pole-position point, the fastest lap of the race point and the win, all while hoping that Marc doesn’t have a good result; but this thing is far from over.”

Feeling the pressure from other drivers right from the start, Miller, in the No. 40 Prefix/Stevens-Miller Racing Dodge Challenger, pushed hard in qualifying and claimed another front row start.

“Qualifying is one of those times where we should be spread out and not around each other, but today, that just wasn’t the case,” Miller explained. “I got passed more in qualifying than I did in any of the three sessions just on the out lap. Things got a little haywire out there. Guys were really trying to push themselves and the track limits.

“While a lot of the guys were racy, we were a little bit more methodical, got a couple of good laps in, and were just shy of pole position,” Miller added.

The 2016 NASA Eastern States Spec Miata National Champion Tyler Kicera made his professional motorsports debut in TA2 a memorable one. While new to TA2, Kicera has a lot of experience on the 3.4-mile, 11-turn Watkins Glen circuit, setting a new Spec Miata track record en route to his 2016 title.

Wheeling the No. 4 Carbotech Brakes/Kicera Motorsports Ford Mustang, the Pennsylvania native set the third fastest time of the day on the opening lap, reeling off a 1m51.500s. But contact with another car on Lap 2 wrecked his Mustang’s front end — and his chance of taking pole.

“The opening lap was pretty full on,” said Kicera. “I thought we would go out and warm the car, but the other guys ahead of me kind of went, so I figured I probably needed to follow suit being the new guy. I got a really good first lap in but then got mixed up with some others, and ruined my shot at pole. It’s frustrating that we sit P3 on the grid and have to spend a lot of time this evening working on the car to try to make the race tomorrow.”

Sharing the second row is another top contender, Thomas Merrill. Returning to the No. 81 Skip Barber Ford Mustang, Merrill qualified fourth in his first laps around Watkins Glen with the Big Diehl Racing-prepared TA2 car.

“These things are awesome to drive around here,” Merrill said. “This place is super fast, super smooth, and flying these things through the chicane is a special experience.”

Scott Lagasse Jr. in the No. 92 SLR/Fields Racing/M1 Racecars Chevrolet Camaro rounded out the top five.

Seventeen-year-old Kent Vaccaro made his mark in qualifying driving the No. 25 BC Race Cars Chevrolet Camaro. Piloting a race car with a roof for the first time, the teenager wound up an impressive sixth, with a fast time of 1m52.302s.

“It was a tremendous day,” Vaccaro beamed after his first qualifying session. “I got comfortable with the car pretty quickly. My coach told me today to lick the stamp and send it, and that’s exactly what we did. BC Race Cars gave me a fast car this weekend, and I was able to showcase that in qualifying.

“I’m used to running open-wheel cars for around 30 minutes per session, so the heat and extended track time in the TA2 car are things I had to get used to. The Cool Shirt really makes a difference.”

NASCAR K&N Pro Series East driver Ty Gibbs session was cut short after breaking a right lower ball joint on his No. 26 Mike Cope Racing machine entering the the Loop, leaving him back on Row 4 for Saturday’s 100-mile race.

“Breaking the ball joint ruined our qualifying session,” Gibbs said. “We only got two laps in and will start seventh. Mike Cope Racing gave me a really good car, though, and we will kill it in the race tomorrow.” 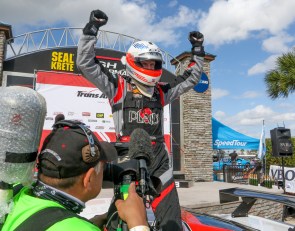