Following a tough BatteryTender Global Mazda MX-5 Cup presented by BFGoodrich Tires Race 1in Portland, Selin Rollan (No. 87 Sick Sideways) added fuel to his championship hopes with a win in race two. John Dean II (No. 16 Sick Sideways) completed a Portland sweep in the ND1 class with his second win of the weekend.

The victory moved Dean to an 80-point advantage, a margin that earns him $100,000 in support from Mazda for securing the ND1 class championship.

Starting from the pole position, Rollan led 24 laps of the 32-lap race, which was a key part of his strategy.

“That was insane and one of the craziest races I have ever been a part of,” Rollan said. “My strategy was to try and lead the most laps, so that is why there were so many lead changes. I was trying to catch as many bonus points as possible after yesterday.” 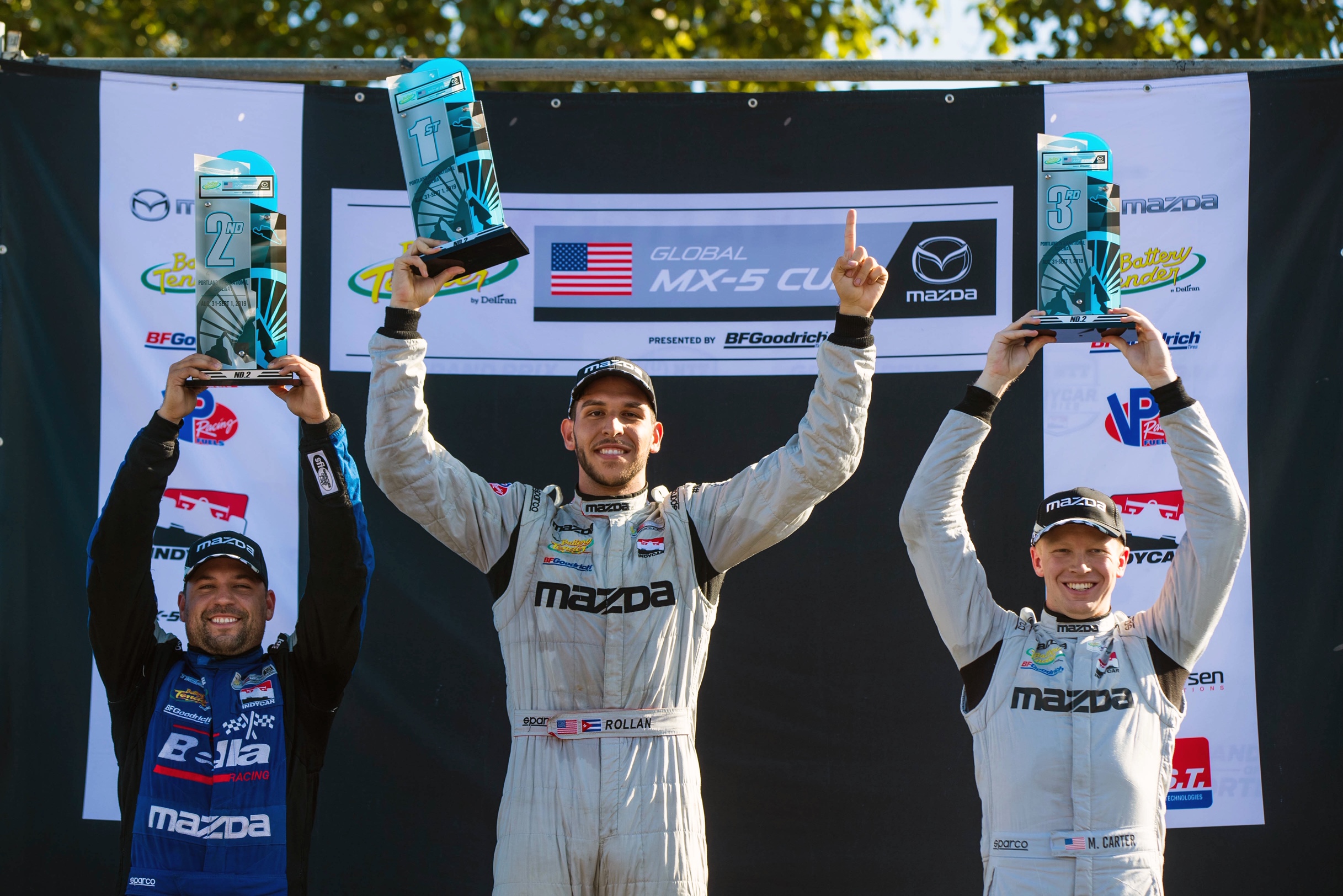 A bobble by Ortiz on the final lap gave Rollan a comfortable gap to the checkered flag. The win, Rollan’s fourth of the season, was sweet redemption after a sixth-place finish in Saturday’s race.

“I think we should be close on points going into the last race,” Rollan said. “Obviously it is going to be a big fight between Bryan (Ortiz) and I and I am sure (Robert) Stout is still in it, so it’s going to be an intense one for sure.”

“At the end there I’m not sure if I let go of the clutch too quickly and it locked up the rear or I just broke too late to try and be closer to him (Selin Rollan),” said Ortiz. “I was just focused on not spinning. All in all I tried to wait for the last lap to see if I could make a move. On the last lap I didn’t have the gap that I needed to try and draft him to make the pass. I tried to work with (Michael) Carter to make the pass but it didn’t happen.”

Ortiz was able to save it and finish second, further protecting his Championship lead. 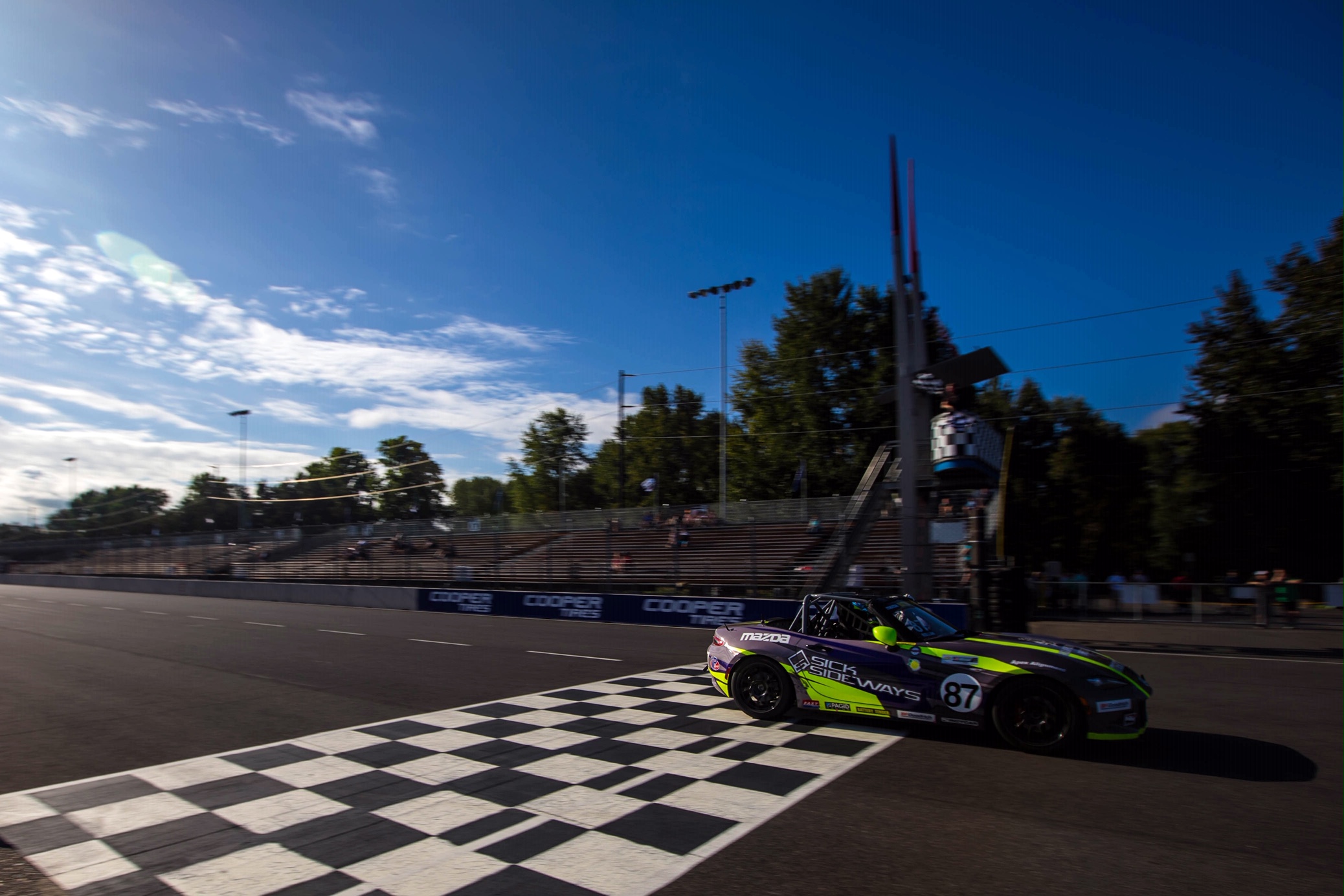 “It’s still a second and third place for the team and Carter did a great job and we came out with good points,” Ortiz added. “It’s still very close in the championship with Selin and we will try to do it again at Laguna.”

Mazda Road to 24 Scholarship driver Carter was in the thick of an eight-car train early on, but fought his way through to join Rollan and Ortiz in the battle to the finish.

“Today was really great and I was just focused on staying ahead of Gresham (Wagner), he is my competition for Rookie of the Year,” Carter said. “Then I just stayed focused and was moving up, and I was sitting fourth when (Robert) Stout missed a shift, which moved me up to third. I was trying to help push Ortiz to get by Rollan, but we couldn’t get it done. It was a great weekend for me, two podiums and I am just looking forward to Laguna Seca.”

Carter leads the Rookie of the Year standings by 33 points over Wagner. The year-end award comes with a $75,000 check.

A sixth-place finish by Stout (No. 28 McCumbee McAleer Racing) cost him dearly in the point standings as he slid to third, 13 points behind Rollan. 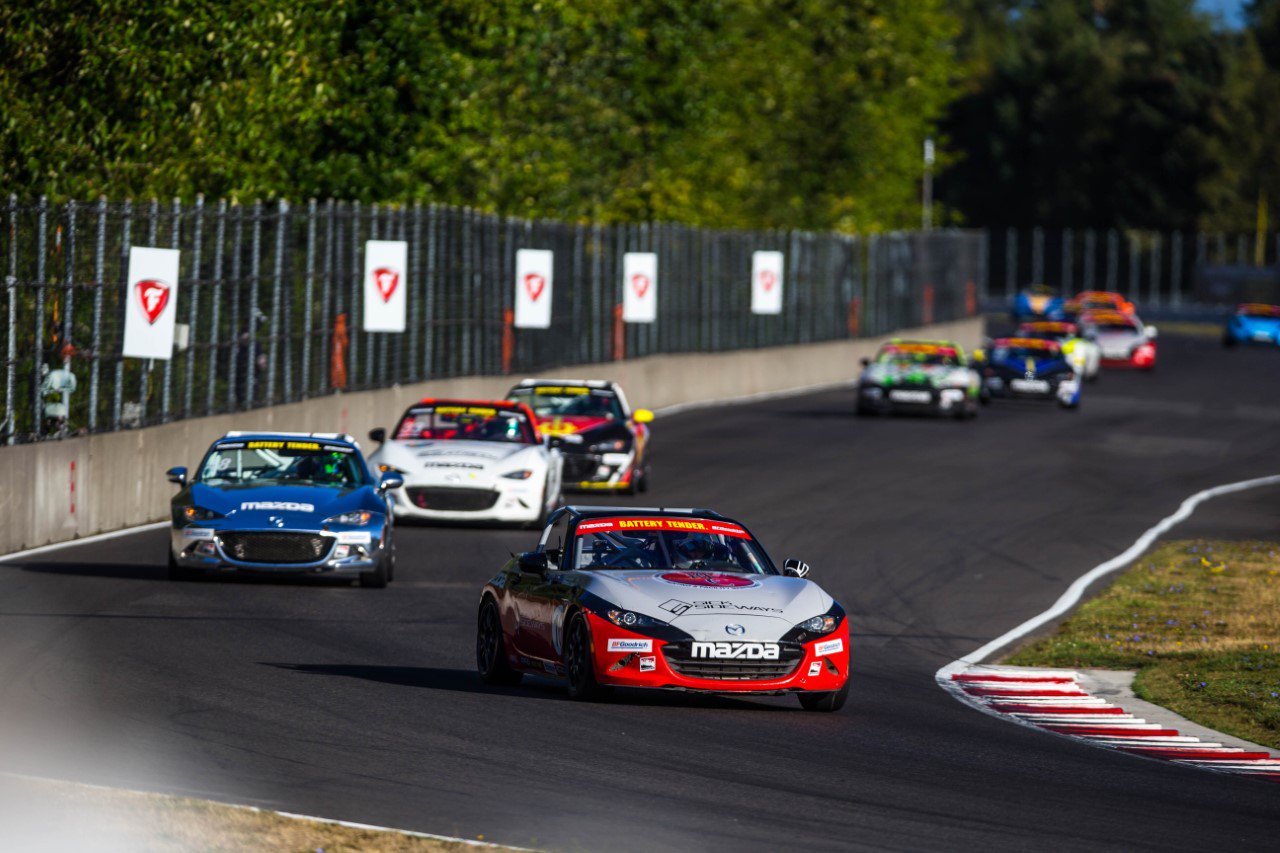 Ortiz leads the Championship and race to the $200,000 prize by 11 points over Rollan.

Earning his ninth ND1 win of the season,  Dean II has locked up the Championship for previous generation Global Mazda MX-5 Cup cars. Dean held off his main rival, Hernan Palermo (No. 20 Slipstream Performance) for the win.

“It was a fantastic day and the car was perfect,” Dean said. “I was pushing as hard as I could the entire race. In my experience, when you slow down a little bit that’s when you make mistakes. Sarah (Montgomery) is on the podium with me again and we share Harrison Contracting as a sponsor so I’m sure those guys are going to be going nuts at home.”

After making history as the first woman to score a Battery Tender® Global Mazda MX-5 Cup podium, Montgomery backed it up with another one, finishing third after a race-long battle with Carter Weedon (No. 22 Atlanta Speedwerks).

Ryan Hall was the winner of the Battery Tender® Hard Charger Award. The driver of the No. 76 Possien-Hall Motorsports MX-5 advanced 12 positions during the 45-minute race and takes home a new Battery Tender® charger and $1000 check for himself and his crew chief. 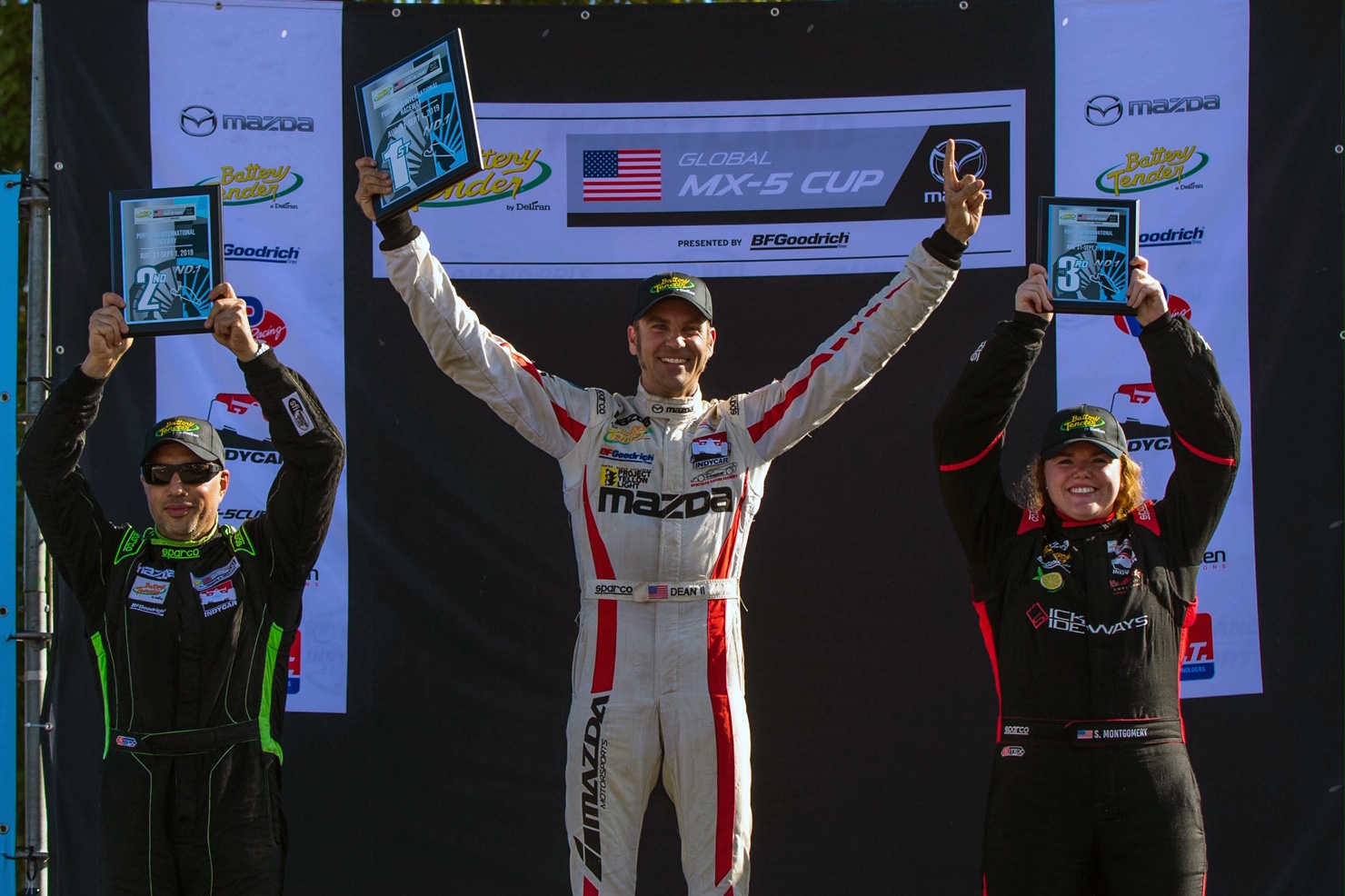 “I was very fortunate today, we were up until 2:30 last night changing the motor, so to make it this far is awesome,” Hall said. “The car was fantastic and we just picked them off piece by piece. The biggest thing was just consistency and not over driving it and making sure that we brought home a clean car.”

Sunday’s race from Portland International Raceway will be posted on the Mazda Motorsports YouTube channel shortly.