Image courtesy of Road to Indy

Hunter McElrea and Pabst Racing enjoyed a stellar weekend at Portland International Raceway by sweeping both 25-lap races which comprised the Cooper Tires USF2000 Grand Prix Presented by Allied Building Products for Pabst Racing. The California-born Australian-raised New Zealander’s third race win in succession vaulted him from a nine-point deficit into a six-point advantage over Braden Eves in the battle for this year’s Cooper Tires USF2000 Championship. Also at stake is a scholarship valued at over $300,000 to move up one step on the Road to Indy to the Indy Pro 2000 Championship Presented by Cooper Tires in 2020.

Eves, from New Albany, Ohio, minimized the damage for Cape Motorsports this afternoon by once again finishing second to McElrea, while Zach Holden, from Greenfield, Ind., completed the podium for Legacy Autosport.

Wire to wire victory for @HunterMcElrea, his 4th win of the season! McElrea takes his first lead in this championship, by six points over Braden Eves#RoadToIndy l #TeamCooperTire #PortlandGP pic.twitter.com/2Y3IfF76MZ

This afternoon’s race saw McElrea make full use of his fourth straight pole position by moving immediately into the lead. Impressively, all 18 cars made it through the tight Festival Curves complex of corners relatively cleanly, although a minor brush between Eves and Christian Rasmussen, who had qualified third for Jay Howard Driver Development, unfortunately resulted in a flat tire for the Danish challenger. Rasmussen rejoined after a pit stop to change the damaged wheel and proceeded to turn the fastest laps of the race but could manage no better than an unrepresentative 17th at the finish.

Eves had no answer to McElrea’s pace, and indeed had his work cut out to fend off a late charge from Holden, who had fought his way past Colin Kaminsky (Pabst Racing) on the fourth lap and then chased for all he was worth for the remainder of the race.

Darren Keane, from Boca Raton, Fla., and Jak Crawford, from Houston, Texas, completed the top six for Cape Motorsports, which, for the first time since early in the 2014 season, has now endured a streak of five races without a victory.

Game on in USF2000 as McElrea scores dominant Portland win

Bruna Tomaselli, from Caibi, Brazil, was next at the finish, earning her ninth top-10 finish of the season, while 16-year-old F1600 Championship Series contender Josh Green (Jay Howard Driver Development), from Mount Kisco, N.J., completed a promising first weekend in a proper downforce car by fighting past Reece Gold (Cape Motorsports) in the late stages.

A spectacular weekend for McElrea’s car owner, Augie Pabst, brought not only his fourth PFC Award of the season but also the lead in the coveted Team Championship. Pabst Racing has now leapfrogged Cape Motorsports and will take a three-point advantage, 320-317, to the final two races of the season at WeatherTech Raceway Laguna Seca, in Monterey, Calif., on the weekend of September 21/22. Pabst will be looking to secure his third consecutive Team Championship as well as his first ever driver championship.

Hunter McElrea (#22 Mazda/Doric NZ/Miles Advisory Partners-Pabst Racing Tatuus USF-17): “This was an amazing weekend. To have a weekend like this – quick in all of the sessions, two poles and two wins – is so hard to come by. And to have a race like that, it’s the best case scenario. I’m so happy with where we are now to have the points lead. The competition, the teams and the drivers, are so talented. To have the lead going into the final round doesn’t change anything: I’m going into Laguna Seca with the same mindset I’ve had all along, especially since Mid-Ohio. I’ll focus on my own thing and hopefully the rest keeps taking care of itself. But the Pabst team gave me such a great car this weekend, and I owe them so much.”

Braden Eves (#8 MDRN Livery/Community Choice Financial-Cape Motorsports Tatuus USF-17): “[Christian] Rasmussen got into my right rear going into Turn Two and that was just enough to give Hunter more of a gap than he would have had. He [McElrea] definitely had the stronger car this weekend, but all win streaks come to an end at some point and we’ll look to do that at Laguna Seca. Cape has been good there and they’re the best in the business. I have full faith that they’ll give me an incredible car. The championship will definitely come down to the last two races.”

Zach Holden (#14 Metalloid Corporation-Legacy Autosport Tatuus USF-17): “It’s great to be back on the podium. I couldn’t have done it without everyone at Metalloid and Legacy Autosport. They gave me a perfect car. To get through Turn One was key here, because that’s where we made all our passes. Rasmussen gifted us fourth place, then Colin [Kaminsky] made a mistake in Turn Six and we got by – it was intense pressure and I was maxed out but we made it happen. The team gave me a great car; we made a change that made us really fast in that race and I can’t thank them enough.” 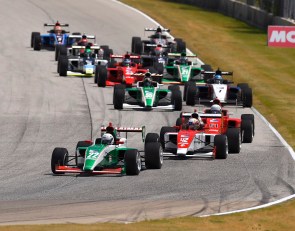 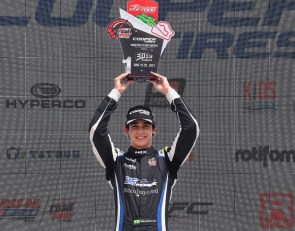