INSIGHT: Can ‘Success ballast’ save LMP1?

INSIGHT: Can ‘Success ballast’ save LMP1?

The second Le Mans 24 Hours of the 2018/19 FIA WEC ‘Super Season,’ which serves as the final round, is almost upon us. This year’s big unknown is whether or not LMP1 will deliver any sort of entertainment after a season of Toyota dominance over the privateer pack with its pair of near-infallible TS050 HYBRIDs.

Equivalence of Technology has governed the class this season, as it has in previous years where the World Endurance Championship had multiple factory hybrid teams. The key difference this time around is, it hasn’t been able to produce good racing. Toyota Gazoo Racing’s resources, driver set and car have all proven too much for the privateer LMP1 teams, who are still keenly pressing on to develop their machinery.

It’s not a surprise that Toyota has been able to dominate — it has the fastest, most reliable car on the grid, and it’s not even close. That, coupled with the built-in advantage Toyota has in the pits (being able to fuel far quicker than its privateer counterparts) has made for some rather forgettable encounters.

That hasn’t stopped the ACO from attempting to close the cavernous gap between the hybrid and non-hybrid prototypes. Now, many will (rightly) criticize the governing body for reacting far too slowly to Toyota’s dominance, and for not being transparent enough when making various changes through the season. The tide, though, may be turning.

Refueling time and coping with traffic are both elements of Toyota’s advantage in the races.

The ACO released a Q&A with technical director Thierry Bouvet this week, and it included some rather interesting passages. It served as a chance for Bouvet to answer some of the more pressing questions the public and members of the paddock have regarding EoT. And it leaves us with much to ponder.

Bouvet was quick to point out that the purpose of the current EoT was “designed to ensure that the privateers who came in with new, non-hybrid cars in 2018 can rival with the Toyota TS050 Hybrid that the manufacturer has been developing since 2012.”

In that, the system has indeed failed. Over a year into the ‘Super Season’ and still Toyota has been winning races by multiple laps. Not just because the other P1s have faltered (though reliability issues and incidents haven’t helped), but because the TS050s can carve their way through traffic far more effectively over the course of the races thanks to the boost their hybrid systems provide.

The TS050’s systems and the way in which it delivers performance are just a cut above the privateers and have been developed over multiple seasons, so it’s been quite a task to rein them in.

LMP1 Privateer prototypes can get close over a single (clear) lap, and in recent races both SMP Racing’s BR1s and Rebellion’s R-13s have taken the fight to the Japanese goliath in qualifying. The races though, have been a different story. Time and money are luxuries that the privateers haven’t had…

Privateer LMP1s like SMP’s are in the same class, but a different league in the races.

Understandably, Bouvet recognizes that the net result of the mixture of technologies and the EoT process has not produced good racing.

“We would have liked closer races between the hybrid and non-hybrid cars,” he said. “We are already working on a slightly different system for next season which could also take race results into consideration.

“Equivalence between naturally aspirated and turbocharged engines has been achieved in all races. Between hybrid and non-hybrid cars, we have approached our goal but have come up against the maximum physical limits of non-hybrid cars. Engine power couldn’t be increased any more, nor car mass reduced.

Just what is this “slightly different system” he touts? “Success ballast.”

Success ballast isn’t new to ACO racing; in fact, it’s recently crept into GTE racing. This year in the European Le Mans Series, the GTE class cars have been racing under a new-for-2019 ballast system designed to keep the pack tight, though it’s too early in the season (after two races) to truly judge its effectiveness.

Could “success ballast” make this a scene lasting beyond the first lap? Time will tell.

Bouvet claims it’s a “good solution” and he may be right. Adding weight to the Toyotas could make a substantial difference, though this writer has conducted a substantial ‘BoP experiment’ in the past in order to get a better understanding of how the various methods of balancing GT cars works.

The ACO clearly realizes that something must be done though. With the timing and content of the proposed ‘Hypercar’ formula still in flux, it could be imperative that the ACO retains its current LMP1 Privateer group going forward and attracts new teams. The cars we’re watching now may well have a longer life cycle than we think.

Before all of that though will we get a race at Le Mans in two weeks? Bouvet certainly hopes so.

“We have published the EoT for Le Mans Test Day and have left the physical parameters for the non-hybrids (engine power and vehicle mass) at their potential maximum,” he concludes. “The Toyota will also be 10 kg heavier than last year for Le Mans.

“We shall analyze fuel consumption data on Test Day to calibrate the different amounts of fuel for the race. The cars will be very close in terms of lap times. As EoT is less favorable to the hybrids at Le Mans than elsewhere, we are quite confident that the non-hybrids will be very close for this ‘Super Finale.’” 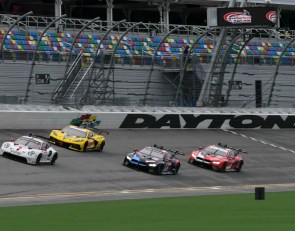