Alexander Rossi doesn’t believe that the fuel hose problem that delayed him in the pits midway through the Indy 500 had any bearing on his narrow loss to Simon Pagenaud.

Rossi had just taken the lead when he lost four positions while his crew struggled to connect the fuel hose during a stop. His frantic gesticulations in the car underlined his frustration at the time, but speaking after the race, he insisted that it didn’t affect the outcome.

“When you come here four times and three of the times you can’t get fuel in the car, I think you can understand why I was upset,” he said. “It can’t happen. I mean, it wasn’t a human error, it was a mechanical problem, but still, it’s not something that we can have here. It’s the biggest race in the world, and 75 percent of the time we can’t get fuel in the race car.

“We need to address that, but the boys did a great job of recovering. Rob Edwards, as always, is exceptional at being the steady voice and very, very helpful for me in terms of getting back to center and just focusing on getting back to where we needed to be. So ultimately it didn’t affect the end result. We’re lucky that it didn’t, but at the end of the day, they recovered nicely. Our last pit stop was mega, got us back into the lead before that final yellow came out.”

The 2016 Indy 500 winner was also philosophical about his inability to gap Pagenaud after the final restart, where the Frenchman was able to capitalize on better horsepower to dictate the last few laps.

“It was pretty inevitable,” he said. “You saw on the last restart, he just drove by us. There was the opportunity there to get the lead. I had been working on it for 12, 13 laps, and it finally came, and I didn’t have a choice, I just had to hope that maybe he would lose so much behind me and that Takuma (Sato) or Josef (Newgarden) or whatever would get him, and I would be able to have enough of a cushion for the final two laps. But I passed him in Turn 1 and he was straight back by me into Turn 1 [on the next lap], so there was nothing I could do.”

Rossi was not the only Honda driver to reference a lack of horsepower as having put him at a disadvantage — teammate Ryan Hunter-Reay expressed similar sentiments — but he said that the difference between the manufacturers was a natural product of competition, rather than an issue that needs to be addressed.

“Things ebb and flow,” he said. “We’ve been a strong team for a couple of years, and then it goes in cycles. Honda is doing a great job, and working their butts off to continue pushing this engine that’s been around for the better part of a decade to continually bring updates. I think the step that they took this year compared to last year was good. It got us a lot closer. Ultimately it wasn’t enough, but no, they’re doing everything they can, and until there’s a change in the regulations, it’s just everyone is kind of at their maximum. We are definitely stronger on some tracks, they’re stronger on others, and that parity is what makes this series what it is. You’re never going to have it completely go your way as much as you’d like to, but no, I don’t think there’s any fix necessary.”

What a thrilling finish. You did not disappoint, @IMS. #INDYCAR // #Indy500 pic.twitter.com/0Gx9ssalKT

There were questions raised about the vigor of some of Pagenaud’s moves toward the end of the race, which Rossi said was aggressive, but not inappropriate considering they were in the final laps of the Indy 500. “I mean, yeah, he was moving in reaction for sure,” he said. “But the last lap of the Indy 500, they’re not going to do anything about it. It’s kind of irrelevant.”

It was a different story when it came to his experience trying to get around the lapped car of Oriol Servia earlier in the race, though.

“It was one of the most disrespectful things I’ve ever seen in a race car, to be honest,” he said. “He’s a lap down and defending, putting me to the wall at 230 miles an hour. It’s unacceptable. It’s unacceptable for him, and it’s unacceptable that IndyCar allowed it to happen as long as they did.”

A BRILLIANT MOVE by @AlexanderRossi, taking it all the way to the grass to pass!

But all of that — the fueling problems, the straightline speed deficit, the Servia rage — took a back seat to the simple truth that on this day, he and his team almost had enough to win the Indy 500. Almost.

“Once you’ve won this thing once, the desire to win just ramps up exponentially every year,” he said. “So it sucks to come this close and really have nothing that we as a team could have done differently. I’m proud of them. I’m proud of the effort that they always put in, and hen we get No. 2, it’s going to be probably a huge explosion of emotions because we all want it really bad.” 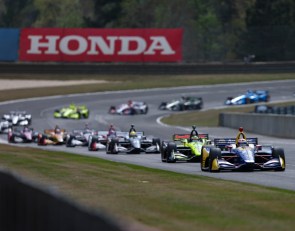