James Hinchcliffe became the first driver to crash out of qualifying at the Indianapolis 500 when he suffered a big hit during his first run, but he was able to climb out of his car.

Going through Turn 2 on the second lap of his run, Hinchcliffe was a little high when the rear of the No. 5 Arrow Schmidt Peterson Motorsport entry started to come around on him. Steering into the spin, Hinchcliffe hit the SAFER barrier on the outside of the corner almost square on, with the left rear making the first heavy impact.

After this incident in Turn 2, @Hinchtown has been checked, cleared, and released by the @IMS Infield Medical Center. #ThisIsMay | #Indy500 pic.twitter.com/4t0H8vWJZy

The car got airborne and nearly went over, with the safety features under the car ensuring it dropped back down on its floor.

Hinchcliffe took a few minutes to compose himself after the hit with the AMR Safety Team around the car, but was able to climb out unaided and walk over to the ambulance to be taken to the medical center for checks.

"Its our nightmare." says @Hinchtown after a scary crash during IndyCar qualifying. Luckily, the Mayor of Hinchtown walks away OK.

Under yellow but still have a lot to go today.
LINK: https://t.co/3YGIi9JMs2#MustbeMay pic.twitter.com/AwugsrvUs5

The Canadian was checked and released, and walking with a limp says the car snapped quickly on him having felt nervous throughout the run.

“The car was on the edge for sure…” Hinchcliffe said. “We were a little loose in (Turns) 3 and 4 but 1 and 2 were solid. I was sort of planning to dial in some understeer in the north side of the track on that lap. Something just got me in 2 — I don’t know if it was a gust of wind or what. We’ve been pretty aggressive on the setup and with a gusty day, that happens.

“It’s pretty much our nightmare. It’s sub-optimal, to use engineering parlance, but I’ve got a lot of faith in the No. 5 Arrows guys. We’re going to get this car or another car back together and take another shot tomorrow.

“That’s what it’s like being on the edge at Indy — that’s what it’s all about. We obviously overstepped today which was unfortunate. I think the Arrow car was going to be good. It’s a shame. I don’t know what to say, man. It’s tough. 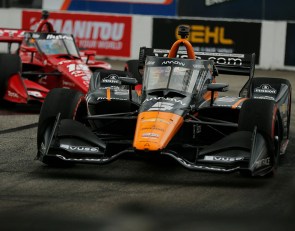