The No. 9 K-PAX Racing Bentley Continental GT3 pair expertly held off the advances of their Pro class competitors to strike a third-time-lucky win after taking two second-place finishes in the previous round at Circuit of The Americas.

Parente led away from pole position but had Patrick Long for close company in the No. 58 Wright Motorsports Porsche 911 GT3 R throughout a fast-paced opening stint.

A quick mid-race driver swap from the K-PAX crew created some breathing room between the Bentley and the Porsche but a hard charge from Long’s co-driver Scott Hargrove — who was able to counteract Soucek’s straight-line pace with rapid speed in the corners — thrust Wright back into contention.

Hargrove spent much of the second stint studying the back of Soucek’s bumper before taking an unfortunate trip through the grass at Oak Tree Bend which brought out the safety car with 12 minutes remaining.

Soucek ended up trading Hargrove for the rest of the GT3 field as everyone bunched up onto the tail of the Bentley for a three-minute dash to the checkered flag. However, Soucek managed the restart to perfection and went on to take a three-second victory over Marco Holzer in the No. 24 Alegra Motorsports Porsche.

“I got out of the pits and we had a good strategy, we were not undercut by our rivals, so we ended up having a good gap to Hargrove. But, unfortunately, I made a small mistake going wide at Oak Tree and I went on the grass and lost a couple of seconds,” related Soucek. “From then I thought not to push as much and get the tires to work. At the restart I knew I had two lapped cars between me and Marco Holzer, so I was quite relaxed on the safety car restart. I pulled the gap and that was it. It took one year and two races for the win to happen, so happy days. We need to keep up the momentum.”

The result helps Barkey and Marcelli extend their lead in the Pro-Am drivers’ standings heading into tomorrow’s 90-minute contest.

Holzer’s co-driver Wolf Henzler made an early move on Miguel Molina in the No. 61 R. Ferri Motorsport Ferrari 488 GT3 in a position change that would hold out until the end of the race.

Henzler and Molina ran third and fourth for much of the opening stint until an off-track moment for the No. 3 K-PAX Bentley promoted them both to podium spots.

At the end, Molina’s driving partner Toni Vilander secured the final step on the overall podium with a late move for position on Kyle Marcelli’s No. 80 Racers Edge Motorsports Acura NSX GT3 Evo at Oak Tree on the final lap.

Despite losing out on the top-three place, Marcelli — who had briefly got past Molina at the final restart — still came through to clinch Pro-Am class honors along with his driving partner Martin Barkey.

“We left the pits in second place and managed to get a bit of an undercut on the leading car. I was able to get by right away and open a bit of a gap,” explained Marcelli. “In the closing stages we had a comfortable eight-second lead and were looking for a full course caution, which came. I found myself up in the overall fight for a podium. We’re just going to have to race hard [again] tomorrow. Although these races are 90 minutes there is quite a lot of attrition and a lot of things happening. We’ll just try to control what we can and see where we end up.”

Acuras finished 1-2 in the category stakes, with Till Bechtolsheimer and Ryan Eversley finishing second (and fifth overall) in their Gradient Racing machine, just ahead of Matt Plumb and Alfred Caiola’s No. 99 One11 Competition Ferrari 488 GT3.

In the Am class, Martin Fuentes and Caesar Bacarella converted their pole position into a third consecutive victory aboard their tricolored No. 7 Squadra Corsa Garage Italia Ferrari.

Blancpain GT World Challenge America will return to action Sunday at 1:15 p.m. Live coverage will be available on CBS Sports Network and at gt-world-challenge-america.com. Check your local listings for more information. 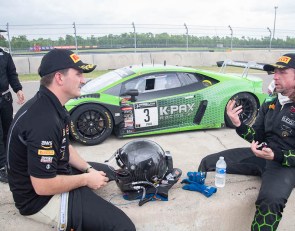