ISM Raceway was quick to express its enthusiasm at being designate the host of next year’s NASCAR season finale, a change that spearheads the significantly revised schedule unveiled on Tuesday.

“Hosting the NASCAR Championship Weekend in 2020 is an incredible opportunity for ISM Raceway, the West Valley and the entire Phoenix metropolitan area,” said track president Julie Giese. “This market has established itself as a sports and entertainment destination, hosting championship events across professional and amateur sports for years, and we are thrilled to add the NASCAR Championship to this long list of sporting events here in Arizona.”

Elsewhere, Atlanta Motor Speedway is now race number five after the west coast swing. For the last five years, it has followed the season-opening Daytona 500.

“This is a big win for our Speedway and its fans,” said AMS executive vice president and general manager Brandon Hutchison. “Our fans have been asking for a warmer race day, so taking the opportunity to move our race weekend into spring was a no-brainer. When March 15, 2020, rolls around the flowers and plants around our facility will be blooming, and our fans will be enjoying warmer, more inviting weather as we celebrate our 60th year.”

Martinsville is also now getting its night race after installing lights in 2017. The spring race will be on the Saturday night of Mother’s Day Weekend.

Martinsville’s second race is staying in the playoffs, but has become the penultimate race on the schedule.

“We are going to move to one of the most important races on the schedule, setting up the Cup Series finale,” Campbell said. “Recent history has shown us that drivers will do whatever it takes to secure a spot in the Championship Race, and now the urgency and intensity will go to another level, as it’s the last shot for teams to have a chance at the championship.”

During the summer, Pocono Raceway will have just one weekend but will still hold two Cup Series races.

“Pocono Raceway will be a marquee, bucket-list event next year,” said Pocono CEO Nick Igdalsky. “We will be the first track to host two, points-paying Cup races in consecutive dates in NASCAR’s modern era (1972-present.) Our family and staff remain committed to ensuring fans see the same value for their tickets as they have in years past. Kids, ages 12 and under, will still receive free gate admission to both of these races next summer.

“Fans can still purchase every ticket in advance with confidence because of our Worry Free Weather Guarantee.  We guarantee that if a Cup race is postponed due to weather, we will offer you an automatic refund on unused tickets! The best way for a fan to ensure they can attend our 2020 race weekend is to have a 2019 ticket.”

The 16-driver playoff field is going to be set in late August on the high banks of Daytona.

“The Coke Zero Sugar 400 will continue to be one of the cornerstone events on the NASCAR schedule and will now serve as the final race of the regular season,” said track president Chip Wile. “Daytona International Speedway strives to deliver the most exciting racing for our fans, and this date change adds another layer of drama and excitement with a potential walk-off home run moment for a driver to solidify a playoff berth.”

Darlington Raceway holds down its spot on Labor Day weekend but now opens the postseason.

“To be able to host our Labor Day throwback weekend as the first race of the NASCAR Playoffs will create tremendous excitement and enthusiasm for our fans,” said track president Kerry Tharp. “Darlington Raceway, considered one of the toughest tracks on the circuit, will definitely challenge the drivers right from the start of the postseason. To combine our throwback weekend, which celebrates the sport’s past, present, and future, with the initial start to the championship run, should provide plenty of additional excitement, and energy to the entire weekend.”

The first elimination race in the playoffs will be the Bristol short track.

“I am really excited about the 2020 season schedule, which promises to be a memorable one with the Food City 500 returning to the schedule on a beautiful Sunday, April 5 spring afternoon and the Bass Pro Shops NRA Night Race moving to Saturday, Sept. 19, as a key race in the NASCAR Playoffs,” said Jerry Caldwell, BMS executive vice president and general manager.

“If NASCAR fans thought they’ve seen tempers flare and sparks fly under the lights at the Bass Pro Shops NRA Night Race, just wait until they experience a real pressure-packed NASCAR playoff elimination race at Bristol Motor Speedway. We’re thankful to the fans that voiced their opinions and rooted for more short-track racing in the Playoffs, and appreciative of NASCAR collaborating with its many stakeholders to deliver a schedule with many positive adjustments.”

Texas also remains in the postseason, however, pushed back a week from its usual date.

“The fall date change solves the issue we’ve dealt with since 2005 in that it gets us off the traditional early November opening week of the Texas general hunting season,” said track president Eddie Gossage. “That’s a big issue for a key faction of our race fans so this should please all the white-tailed deer hunters who couldn’t make it out to the track. Now they can so we’re looking forward to them joining us for our new Oct. 25 race date.” 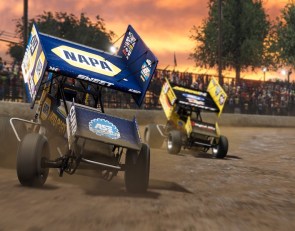